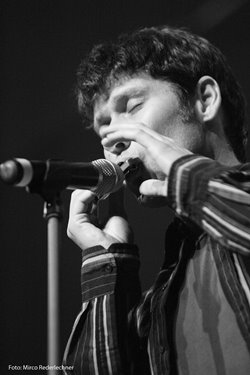 How did you discover the bluesharp ?
~ Per accident, my brother in Law, he once informed me about a workshop for bluesharp in the region. I learned the violine, but started soon with sports where music had no place. But after having some back bone probelms (because of sports..:-)..), I was looking for an instrument to play the music I loved although I did not know at that time, that the music, I love, is Blues music. I got to know through the harmonica the Blues music.

If everything would be possible (waking the dead included) , which bluesharp player would you invite for a jam session?
~ All..., but for sure everybody would like to meet Little Walter who influenced me. Also my former teacher Joe Walter, who died way too early, as lots of them. Than as well Jean Jacques Milteau, Steve Baker, Charlie Musslewhite

What is your favorite blues harp brand / type and tell us why?
~ Hohner is my favorite brand. On one hand because I am an Hohner endorser, and from that point of view hardly played any other brands. I played once Seidel, which has lovely instruments too. On the other hand I like the sound of the Hohner harp most, although I'm fighting with the ergonomic. Especially marine band deluxe and corssover are my instruments, the sound is great, the response too, the ergonomia is at my point of view not optimal, but there is probably always something.. :.-)

What are the most important tips you can give to someone who wants to learn to play the bluesharp?
~ This is a difficult question, although I teach Harmonica at a school, and have students. I guess there so many different ways and tips for beginners. I think one important tip, or not a tip, more a passion is: love the music you wanna play, for example blues music. I think if you wanna play blues music, you have to love and to listen to it. thats the way I started, I loved that music even not knowing it was blues music, and than I heard the blues harps playing in those songs, and it got me. Another tip can be: to be patient, when the first steps like playing clear single note or bend notes are not working well at the beginning, somewhen it will happen, but it can take some time. There are a lot of things that can be said more, so I stop here with those 2 ideas.

Tongue blocking or lip pursing, what do you prefer and tell us why.
~ I use both techniques. I started with lip pursing, but after some years I could no longer go on playing not having tried the tongue block technique, since i listen to Little Walter, Sony Boy I and II, where Sonny Boy II played a powerful great tongue blocked notes. I listen a lot to Charlie Musselwhite or Kim Wilson as well. They are great musicians. So for the faster mor jazzy or funky stuff I play mostly lip pursing, and for the more traditional, fat, sometimes slow songs, I mostly use tongue blocking. Sometimes I even mix it in the same song.

Give us the 3 most important albums every (beginning) blues harp player must buy.
~ Again a very difficult question :-), I guess, it does not exist such an album, or than we have thousands of them. I think as soon as you have an album with harmonica on it, and someone likes the sound and way of playing, that's it, this album is one of the three. So to give tips here is really difficult, but for me Jean Jacques Milteau, or Steve Baker, Little Walter were the musicians to start listen and work on the harmonica.

How do you clean your harps?
~ I use earcleaners for tongues in the the wooden comb, paper tissues for the metal covers and reed plates. I do it only with water. Especially with reed plate and the wooden comb I am very cautious. I do it all 1 to 2 months in average, depending how often I play and the way they look.

Describe the ultimate recording studio (not the technique but the facilities)
~ Our reherasel room... No, to be serious, I am sure there so many good recording studios all over the world, but for our next album we will do the stuff in our own room, we will most probably also mix the sound by ourselves, for mastering we will try to find a sond engineer, that understands our sound best.

Are you still nervous before going on stage and if so, do you use any "rituals" to calm you nerves?
~ Yes, before every gig there's a kind of tension in me. It's a mixture of pre-joy, that I will soon play the music I love, a un certain feeling whether the audience will like the music, etc. - finally I have this tension which shows me that I am ready to play and hope we all will have a great evenig together, we the band and the audience.

What was the most memorable day in your musical career?
~ Difficult question again, there were many great days in my musical way, as well as days, where I wished to be a back in office, doing some boring computer stuff :-), it is like everywhere. The good days were great, mostly great concerts with good sounds and great audience. I think the happiest feeling I can get, is, when I feel, that the audience likes the music I am doing and is with me and vice versa. When people after the gig tell me that we lightend their day, or we met their hearts with our music, than I am very happy, these moments are great, and I am happy, that it happens often. But there is another musical story, which does probably not belong to one of my most memorable day, but it showed me that I am on the right way, and it was somehow a very special evening. A few years ago I had the very first gig with my band "4some blues" (3 Vienna Austrians musicians and me), and we had this baptism of fire at the Blues Festival Baden in Switzerland. We had done only 1 or 2 rehersals before, never perfomed live together before, so we were quite nervous... So we started playing and I thought now the worst is yet to come, and expected the audience to give as no or a little aplause, because they would feel the same as I did..., but I was worng: After the 1st song (which I think it was so unsure and shaky) people didn't stop claping and shouting for more... They wanted more and we got better from song to song. At the end we gave some additonals and after the gig I found out that great Kim Wilson and his band was in the audience (because he had a gig the day after at the same festival). They entered the gig in the first set, and did not leave in the 2nd...:-), we had a short talk after and he told me how much he liked our music. That is a great gift and moment, if someone you adore tells you pos about your music. For more info about Walter Baumgartner you can go to: