How did you discover the bluesharp ?
~ At our home my mother had a chromatic she used for school and we weren't supposed to play it, so sometimes I smuggled it to a back room and started noodling freejazz on it. Later on, while studying Sociology I heard someone playing a blues harp in a pub and thought, "what a cool sound", I'm going to buy one of those tomorrow, which I did.
Soon after that I was looking for a record with harmonica on it and the first one I found was "The Best of Sonny Boy Williamson II / Chess Records" and I got hooked.

If everything would be possible (waking the dead included) , which bluesharp player would you invite for a jam session?
~ Very difficult question because there are quite a few people I'd like to jam with but as jamming is also a meeting of minds I'd love to meet the mastermind of Sonny Boy Williamson II. Sometimes meeting your hero can turn into a disappointment, but in the case of Sonny Boy I believe there would be little chance for that. Dreaming up loud Sonny Boy would start cooking a meal after the jam and I would do the dishes.

What is your favorite bluesharp brand / type and tell us why?
~ Well since the Hohner Rocket came out with my picture on it, I'm bound to play that crispy harp.
Together with the amazing and very versatile Hohner Crossover and the CX-12 for chromatic playing, because you can work on it very quickly.

What are the most important tips you can give to someone who wants to learn to play the bluesharp?
~ Never forget that the harmonica is a false easy instrument, so don't give up when you don't improve for a while. Equally important, it's not because you can make sound while you blow and draw that you have to play all the time. The notes you don't play are music too! When I was playing only a couple of years I read an interview with Hans Dulfer saying "the worst thing that can happen to you is a harmonica player asking to sit in" and I was a bit upset by that comment, but sometimes I have seen players (not only harpers) that fit that description, like those who keep on playing thru your concert in the wrong key. Later on we played Paradiso and invited Hans Dulfer once to sit in with us, but that's a whole different story.

Tongue blocking or lip pursing, what do you prefer and tell us why.
~ Both, simply because they both have their plus and mins. Without tongue bloque it's hard to get a really fat tone, but for some fancy ornaments you need a pucker embouchure. Also on the chromatic I believe tongue blocking gives you the deeper tone.

How do you clean your harps?
~ Most important is not to play with a mouth full of olives, peanuts etc... and to avoid sugary drinks while playing. Playing with a clean mouth makes your harps last much longer. I also have Isopropyl alcohol for sterilising the harmonica's when I do some maintenance tuning and stuff.

What is the question interviewers never seem to ask you and...you wish they would? (Please provide your answer as well.)
~ What's the biggest challenge for a harmonica player?
Mainly I believe the hardest thing for any musician is to find your own musical world and language. It's always easier to walk on a path that somebody else already layed out, but it's more fulfilling to discover, lay out and follow your own path. I believe the harmonica is suited for every kind of music, but before you even played one note on it most people already assume you gonna wail some blues or play a country tune on it. It's quite a challenge to play what the music and nothing but the music needs.

Describe the ultimate recording studio (not the technique but the facilities)
~ In our case with The Rhythm Junks we always look for a room with a great sound for the drums. We also like to record all together in the same room, so the studio has to be big enough and to have acoustic panels to be able to isolate a bit when necessary. Tape is always cool, but digital can sound great as well.

Are you still nervous before going on stage and if so, do you use any "rituals" to calm you nerves?
~ Frankly, I'm rarely really nervous, but I always feel something just before we go on, you could rather call it drive or enthusiasm (In Dutch we would call it "goesting"!)

What was the most memorable day in your musical career?
~ Frankly, there have been countless ones so it's hard to pick one out, but when we played in Shanghai on the JZ International Jazz Festival there had been a storm just before we were planned. Dozens of liters of water fell into the monitor table, the stage was almost collapsing from the wind and I was almost sure the festival was about to get cancelled. But the storm faded and we got on stage and then we saw thousands of people who had plastic bags over them to protect them for the rain. We started playing and greeted them and after 3 notes they all stood up and started dancing, awesome! 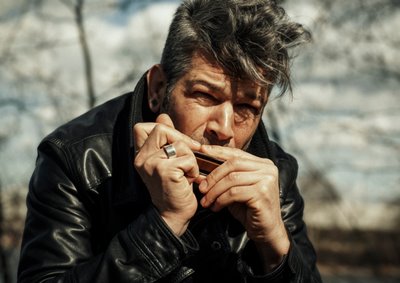 For more info about Steven De bruyn you can go to: