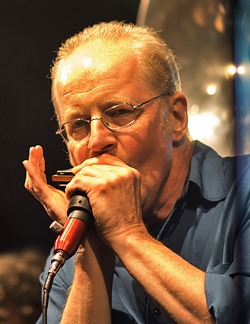 How did you discover the bluesharp ?
~ I was visiting a friend shortly before my 16th birthday in London in 1969 and he had an Echo Super Vamper (the British version of the Marine Band) sitiing on his mantlepiece. I was fascinated by the look and feel of the instrument and was immediately hooked. I know it was sitting there just waiting to ensnare me and as soon as I got one of my own a few weeks later, I taught myself to play from records.

If everything would be possible (waking the dead included) , which bluesharp player would you invite for a jam session?
~ Strange question. Most of the seminal black American blues players would probably have said "fuck off" if you had asked them to jam, though I once had the pleasure of sitting in with Carey Bell. I've had wonderful experiences jamming with many of today's great players including Joe Filisko, Dave Barrett, Mark Hummel, Mitch Kashmar, Howard Levy, Carlos del Junco, Brendan Power, Rick Estrin, Dennis Gruenling, Henry Heggen, Paul Lamb and many more, but this is just something that happens when good players hang out together. It's no big thing jamming with your mates.

What is your favorite bluesharp brand / type and tell us why?
~ I only play Hohner Marine Band harmonicas, It's the original blues harp and the benchmark against which every other model is judged. I'm very happy to have been deeply involved in the development of the recent upgrades to this iconic instrument (MB Deluxe, Crossover, Thunderbird) and consider the Deluxe and Crossover to be the finest traditional diatonics in the world out of the box. The standard 1896 MB is now extremely good too if you don't need to open it up to work on it, as is the case with many traditional blues players. I own many custom Marine Bands from craftsmen such as Filisko, Richard Sleigh or Thomas Hanke, but mostly I just play stock harps out of the box with minor adjustments. The tone and playing feel of the Marine Band are unique and I can't really play my music on anything else. The sound has a fantastic combination of brightness and warmth which has fascinated me for over 45 years and will no doubt continue to do so, and the response of a well set-up MB has everything I look for in a harmonica.

What are the most important tips you can give to someone who wants to learn to play the bluesharp?
~ Learn to listen. Take lessons from a good teacher. Come to one of my workshops. Read my books. Listen to as many really good players as possible. Remember that technique is just a tool to get the instrument to do what you want it to, not an end in itself. Don't fixate too much on harmonica, learn about music in general (harmony). Then start listening to other instruments and incorporate ideas from them into your harmonica playing. There are many more good instructional books out there now than there were 25 years ago, since I published the Harp Handbook in 1990 the literature has come a long way. There are also countless online videos available, including some of mine, but you have to separate the wheat from the chaff, as a lot of Youtube vids are not very good. The main thing is, practice a real lot!

Whisky wine beer or ...?
~ For which purpose? Don't dip your harps in anything. Always avoid sweet beverages when playing. Water is best, I'm afraid. For pleasure I like good wine.

How do you clean your harps?
~ First I take them apart (a big advantage of MBDL, Crossover etc.). Then I carefully scrape the crud off the combs. I wash bamboo combs briefly under running water if necessary, but don't like to do this with pearwood combs even if sealed. I put the reed plates into warm water with the addition of a little vinegar or lemon juice, let them soak for about half an hour, then clean them gently but thoroughly with a soft toothbrush (never brush across the reeds). Wash the covers and reassemble after tuning & offsetting if necessary. Always put self-tapping screws back in the original holes and never over-tighten them or you'll warp the reed plates. I do this every few months with keys I play a lot, more often if needed.

What is the question interviewers never seem to ask you and...you wish they would? (Please provide your answer as well.)
~ I believe I have a fairly original and recognizable style and have often wondered why interviewers never seem to ask about this. It probably came about because I'm completely self taught and spent many years listening to music which had nothing to do with the harmonica. I borrowed a lot of ideas from sax players and guitarists and tend to think in terms of melody rather than licks. I've also worked as a studio musician for over 35 years in a wide range of styles which have nothing to do with the blues, so I'm accustomed to hearing music in terms of harmony and rhythm rather than being confined to recycling licks in a 12-bar blues. I don't enjoy players on any instrument who lack a clear melodic direction in what they do and I hate relentless "widdley-diddley" playing without pauses, so I tend to leave a lot more space than many harmonica players do when soloing or accompanying.

Describe the ultimate recording studio (not the technique but the facilities)
~ I've made hundreds of commercial recordings as a studio musician in a wide range of styles (mostly recording overdubs rather than everyone playing together live) and am comfortable with the situation. The most important thing would be a good sounding room, decent microphones and an engineer who knows where to position them and how to operate his equipment skillfully without wasting time. It's vital that you get on well with the engineer. Having recorded in a lot of different studios both great and small, I prefer old school analogue recording (i.e. tape not digital, now fairly rare), but have also had great results using Pro Tools or Logic, as you can simulate many analogue effects and most people wouldn't notice the difference anyway. Unfortunately the combination of technological changes and the rise of the internet has forced most traditional studios out of business, but there are still a few around. Sadly, the collapse of CD sales and the spread of rip-off streaming services like Spotify have turned making CDs into a rich man's hobby.

Are you still nervous before going on stage and if so, do you use any "rituals" to calm you nerves.
~ I love performing on stage and am very rarely nervous beforehand. An exception would be the few times I've played with an orchestra, then I was very apprehensive. In that situation, you just have to breathe deeply and trust. Of course it helps if you've rehearsed thoroughly before a show like that. With the blues gigs I play, I don't really think about it much until I'm on stage and then I just listen and go with the flow. That usually works out fine.

What was the most memorable day in your musical career and tell us why.
~ I don't really think of it like that. There were a number of pivotal events which shaped the subsequent course of my career and my life, but they were mostly events involving people rather than special gigs or anything like that. Every day I get to play is memorable and I'm profoundly grateful to have experienced so many of them :-)

For more info about Steve Baker you can go to: