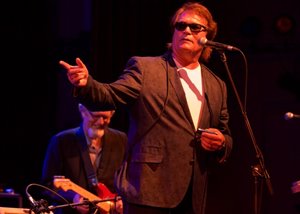 How did you discover the bluesharp ?
~ I began playing harmonica as a young child. I generally played melodies in first position. When I was 18 years old I heard a Sonny Boy Williamson II album, "Bummer Road". That album blew my mind and I've loved it ever since. I quickly collected as many Chess Records albums as I could find, including Muddy Waters, Howlin' Wolf, Jimmy Reed, Little Walter and more. So it was that first Sonny Boy record that really opened my ears to blues harp, and got me turned on the second and third position harp playing.

If everything would be possible (waking the dead included), which bluesharp player would you invite for a jam session?
~ This question is easy for me. Little Walter is my musical hero and favorite harp player. He virtually invented amplified harmonica, and certainly mastered the tones and playing styles for electric harp. He was so far ahead of his time musically, and players still emulate his playing style over 60 years after his death. Simply put, Little Walter was a blues genius, and he stands alone at the top of the blues harp mountain !

What is your favorite blues harp brand / type and tell us why?
~ I play mostly diatonic harmonicas. I prefer the Special 20 "Progressive" model ( 560 ) and the Crossover Marine Band harps ( 2009 ), all made by Hohner. For playing comfort, I've really preferred the Special 20, and that's the harp type I used to record Backtrack Blues Band's album "Way Back Home"

What are the most important tips you can give to someone who wants to learn to play the bluesharp?
~ As far as learning to play blues harp goes, I suggest some serious listening to Sonny Boy Williamson, Little Walter, Paul Butterfield, Kim Wilson, Big Walter Horton, etc. Most guys I know began playing by emulating the riffs and tones on those harmonica based CDs. As to playing tips, I'd say that knowing when NOT to play is critical, especially when performing with a band. Also, phrasing is important. I like players who know when to leave spaces, even during solos. I've never been a guy who's impressed with "fast, ripping solos". I'd rather hear select phrasing where the emphasis is on tone. Of course, each player has the right to select the style that they like best.

Tongue blocking or lip pursing, what do you prefer and tell us why.
~ Both tongue blocking and lip pursing are effective, and each can be used to creative different sounds, depending on the type of song involved. I personally use lip pursing the most, as I find that bending notes and getting the preferred tone comes easiest to me that way. I use tongue blocking a lot to build "big endings" on songs, when the band strives for that effect.

Give us the 3 most important albums every (beginning) blues harp player must buy.
~ There are so many great harp albums out there, it's hard to pick just three. But if I had to do so it would be Little Walter's "Confessing the Blues" and "Hate to See You Go", plus Sonny Boy Williamson II 's "Bummer Road" . After that, I buy anything that Paul Butterfield ever released. All his albums are tops in my opinion!

How do you clean your harps?
~ Cleaning and caring for harmonicas is relatively easy. I always "tap out" the harp to eliminate moisture and wipe down the casing before storage. I keep my harps in plastic containers, to keep dust and debris out. I've discovered that clear, plastic fishing lure boxes work well. Anything is fine, as long as the harps are not exposed to debris that could clog or impact the reeds.

What is the question interviewers never seem to ask you and...you wish they would? (Please provide your answer as well.)
~ "How important do you think the blues harp is to creating the ideal blues sound ?" I love the sound and dynamics that blues harp brings to the ideal blues band. Muddy Waters understood this so well. The sound of the blues harp blends with, and compliments the guitar playing. This is especially true with slide guitar. Duane Allman, of the Allman Brothers Band once said he learned his slide guitar stylings by listening to blues harp players. I completely get where he's coming from there. For me, there are too many current blues bands that are based solely on guitar players .....many of whom sound more like loud, rock players than real blues cats. So to me most of the blues bands I dig have harp players. I hope that trend continues far into the future !

Describe the ultimate recording studio (not the technique but the facilities)
~ I'm not a technical expert in studio technology. For me, the closer to a true "analog" sound the better. I think digital equipment is easy to work with, but may lack the rich, warm sounds I like. So ideally, I'd record on the analog, two inch tape machines, and then dump the tracks into Pro Tools for mixing and editing. Since we often cut tracks "live in the studio", it's important to have a studio where the drums sound great and where the players can achieve some amplifier isolation, while also being able to see one another and play as a unit in the studio. Perhaps it goes without saying, but the Fender tube amplifiers are a "must" for harp and blues guitar players as well. I use 1950's vintage tweed amps, like the Fender Princeton, Bassman and Champ rigs. Sometimes I'll run them all together, to get the tone I'm looking for.

Are you still nervous before going on stage and if so, do you use any "rituals" to calm you nerves?
~ I've been playing with Backtrack Blues Band for 35 years, and we've opened for so many great blues artists... Buddy Guy, B B King, Robert Cray, Johnny Winter, Koko Taylor, Kenny Wayne Shepherd, John Lee Hooker , etc. So I'm not accustomed to feeling "stage fright". But I must confess though, that when we opened a concert for Stevie Ray Vaughan and Double Trouble in Tampa, Florida, I was a bit overwhelmed. At the time, he was the top blues guitarist out there, and his playing was so amazing that it affected me a bit. That's probably as close to "stage fright" as I've ever been.

What was the most memorable day in your musical career?
~ My most memorable experience in music was the tour we played with BB King in Florida. We opened a number of shows for Mr. King, and I was able to see, first hand, how kind he was to his fans and to the opening act. He always made it a point to "thank" the opening band during his shows, and he also met with fans and signed photos after the show. He made me realize how important it was to show respect and love to others....especially your fans. Without fans, the music dies. That's probably why BB King had one of the longest and best careers of any blues artist in history. For more info about Sonny Charles you can go to:

Answers given on February 2, 2017
Photos by Mark Ammons and Carol Gallagher