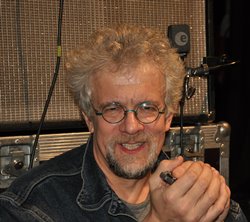 How did you discover the bluesharp ?
~ I remember it very well! I heard it on the radio. It was Sonny Terry & Brownie McGhee album "Live at the Second Fret" It was in the late 1970s. The sound of Sonny's harp thrilled me! I have never heard such beautiful and moving sound before!

If everything would be possible (waking the dead included) , which bluesharp player would you invite for a jam session?
~ I was lucky to jam with Junior Wells (at Checkerboard Lounge in Chicago in 1980. I also have Charlie Musselwhite as a guest in my four songs on my CD "Chory na bluesa". That means, my dreams have already come true! But there are still some harmonica giants I would love to meet, like Paul Butterfield and ask him how to get behemoth diaphragm vibrato!

What is your favorite bluesharp brand / type and tell us why?
~ I am HOHNER endorser and I have always played only HOHNER harmonicas. I have started with the old Marine Band and played them till I found Meisterklase. This model was ideal for me because it is ideal for playing fast runs in a high register.

Whisky wine beer or ...?
~ I used to be whiskey lover. Now, I prefer red wine. Never had drinking problems and I hope I will never have. I am a big enemy of tobacco. Look at James Cotton! He would smoke on the cover of every photo of him I have ever seen. Fortunately, he is still alive but he lost his strong, beautiful, bluesy voice....

How do you clean your harps?
~ I am very careful of hygiene. I never play somebody else harps and never allow anybody to play mine. I put my harps apart once in awhile and brush them with the soft toothbrush (reed plates) and I wash the comb and plates under the sink.

What is the question interviewers never seem to ask you and...you wish they would? (Please provide your answer as well.)
~ Well.... Perhaps, I will tell you the question I am often asked and I do not like it tooo much: "Is it possible to support oneself from playing the blues"? The answer is: "Yes, it is possible". But I do not like to talk about my love and passion in the terms of money.

Are you still nervous before going on stage and if so, do you use any "rituals" to calm you nerves.
~ I have been playing professionally with my band The Blues Nightshift (Nocna Zmiana Bluesa) for 34 years. We have never had a break! I have never played less than 60 gigs a year but there used to be years when we played 100 - 120 gigs. We paled in 15 different countries. I spent approximately 6800 hours on stage in front of the listeners. That means almost one year non stop on stage. And count it 24 hours a day! I mean, I do not have stage fright anymore. But it was not always like that. I was extremely nervous in the beginning of my music adventure on stage!

What was the most memorable day in your musical career and tell us why.
~ There were quite a few moments that were bigger than my dreams... Like recording session with Louisiana Red (The CD "The Last Mohican of the Blues". Like having Charlie Musselwhite as a guest on my CD "Chory na bluesa", In 1989 my band supported The Blues Brothers band(the original movie line up apart from Aykroyd and Belushi). In 1996 we supported B.B.King in Warsaw Sala Kongresowa and we were forced to encore. B.B. King signed my guitar and said it never happened to him before - an encore before B.B.King! For more info about Slawek Wierzcholski you can go to: