How did you discover the bluesharp ?
~ I come from a family of musicians & artists. However my grades were not stellar in high school, so my mother gave me a choice of marching band or sports..(American football & Baseball). I had seen a Hohner Marine Band harmonica in a local pawn shop window..I was instantly drawn to the compactness of it. My four siblings all had different taste in music, so I got to hear a wide sampling of musical genres in their record collections. One record in particular stood out to me, Muddy Waters-"Hard Again". Killer stuff! James Cotton's playing was amazing but the dirtiness of his sound.. amp/mic-- I'd never heard anything like it. I was hooked. I wore out the record trying to get that tone..

If everything would be possible (waking the dead included), which bluesharp player would you invite for a jam session?
~ Well I think I'd invite Muddy Waters & all his stellar musicians throughout his long career ..especially Junior Well & Buddy Guy! You just can't have harp players at a jam.

What is your favorite blues harp brand / type and tell us why?
~ I've tried a few. I hate to throw them away even when they flat out, so I may be a harmonica horder. I'll melt them down some day and turn them into an art piece. LOL. These days, I mostly use out of the box Hohner Special 20's & Hohner Blues Harps. I play Hohner Super Chromonica Chromatic harps on special occasions. On the last recording, "Hit & Run", I bought a couple of Hohner Rocket or Marine Band Crossovers. I like the Low F. They're a little expensive however. LOL. Special 20s tend to bend pretty easily. I can or seem to play faster runs of notes with them and Blues Harp tends to last much longer without flattening..the bend sounds nice on them, but a little harder to bend for me.

What are the most important tips you can give to someone who wants to learn to play the bluesharp?
~ Well when I started out..there wasn't an internet to google harmonica lessons so I had to buy blues records. I spent tons of time listening. It trained my ears. I went to as many live blue shows as possible before the pandemic. A few years into my playing (early nineties) I had an in person lesson with Adam Gussow on the upper Westside/NYC . I was super nervous and the lesson didn't go well. Adam actually wouldn't allow me to book a second lesson because he didn't think he could teach me and I quote, "I don't think it would be fair to take your money." I was kinda hurt, but hey he was honest. That being said, these days there are tons of books; Jason Ricci & Adam Gussow have private lessons and many of their lessons are free on line. I recommend practicing. I usually practice for about an hour a day. I use an App called Chordify to help me quickly identify the key of music the band is in to grab the right harp key. Beginners should master a single note and play acoustic first before playing through an amp & mics . Maybe the most important advice I can give is don't give up. It takes time to master playing blues harp. Just because it's a small instrument does not make it easier to master. Secondly listen to all kinds of music, Blues, Jazz, Rock, steal as many riffs & make them your own.

Tongue blocking or lip pursing, what do you prefer and tell us why.
~ I first learned lip pursing, I had no idea there was any other way, but being a big fan of James Cotton it wasn't possible to play some of his songs/style or a bunch of other harp players without some tongue blocking. I tongue block mainly to flutter on a couple of holes, not too much to get single notes. Since I'm not formally trained I probably have a lot of bad habits, but I think it is best to learn both so you can be versatile.

Give us the 3 most important albums every (beginning) blues harp player must buy.
~ So many-- but, my favorites that I wore down the record needle on are Muddy Waters-Hard Again/James Cotton, Buddy Guy & Junior Wells-Alone and Acoustic , The Paul Butterfield Blues Band (I believe it was his first album)...East-West is also very amazing!

How do you clean your harps?
~ I mainly try not to eat anything while playing things.I used to pour whiskey in them, not sure you should try this..

What is the question interviewers never seem to ask you and...you wish they would? (Please provide your answer as well.)
~ I've only done a half a dozen interviews but let me think...Okay got it..If I wasn't married to the lead singer of Alias Smith & Jones.. what Supermodel would I be trying to date? Probably my amazing super talented/supermodel wife...( she is editing this for me..LOL)

Describe the ultimate recording studio (not the technique but the facilities)
~ Well as a producer/harmonica player I feel like you need a chill/talented recording engineer, hopefully a musician, an extra set of ears, good drum sounds, which are super important. On our new CD "Hit & Run" we had to record my parts last to keep harp from bleeding on to the vocal tracks, except for "Going Down to The River". We recorded it live with an extra guitar and drum track afterwards. I also like seeing some cool vintage tube amps off to the side of the room, to hook a harmonica mic into. I didn't play through any on "Hit & Run" however we went clean and added dirt/reverb/slap/delay afterwards. The studio must have an espresso machine! LOL...30 Below In NYC had it all..

Are you still nervous before going on stage and if so, do you use any "rituals" to calm you nerves?
~ I still close my eyes for most shows. I used to do a shot of Bourbon, but these days I don't drink until we are finished.. I'll arrange my harps and double check to make sure they're all playable. I like to warm up outside the club with a blues scale, but on stage I usually calm down after the first tune we play if we have a talented sound man.LOL

What was the most memorable day in your musical career?
~ At the 2018 Chicago Blues Fest I had the opportunity to perform with the Eddie Cotton Jr band. It was a sunny Saturday around 4 p.m. and the place was packed with thousands of blues fans. First Eddie did a set with his killer band then there was a quick jam session. I signed up back stage but somehow another harmonica player had signed up but his name got crossed out. I think the other harp player thought I did it but I didn't. Anyway, we both jumped on stage with the band and we traded licks. Eddie stopped the rest of the band and began to yell at the audience, "You better make some noise..these two harp players are killing it! Let's let them cut heads!" The both of us played some great stuff that day. I may have peed a bit in my surfer shorts because there were so many folks cheering and yelling. 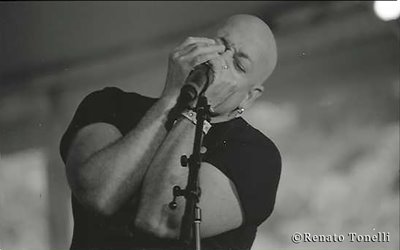 For more info about Sal Carolei you can go to: