How did you discover the bluesharp ?
~ I first heard blues harmonica in the early 1960s. My sister had some Jimmy Reed records. That was where it all started for me.

If everything would be possible (waking the dead included) , which bluesharp player would you invite for a jam session?
~ If I could only pick one, it'd have to be Little Walter.

What is your favorite bluesharp brand / type and tell us why?
~ Hohner Marine Band Deluxe - The reasons why are, first of all, I'm used to Marine Bands. I've been playing Marine Bands for 50 years. Marine Bands have been the instrument of choice for blues harmonica players from the start. I also believe a wood comb gives the instrument a warmer tone. The reason why I choose a Marine Band Deluxe over a standard Marine Band is that they're made with a little more care - built with the more serious player in mind. They seem to be gapped with a little more attention to precision and assembled to be more airtight. And another big reason is, I've been spoiled by Joe Filisko.

What are the most important tips you can give to someone who wants to learn to play the bluesharp?
~ Keep it in your mouth - And, listen very closely and learn from the recordings by the originators of this music.

How do you clean your harps?
~ I don't - Just one more reason for me to stick to drinking water when I'm playing.

What is the question interviewers never seem to ask you and...you wish they would? (Please provide your answer as well.)
~ Would $1.5 million dollars be sufficient compensation for doing this interview? Answer: Yes.

Describe the ultimate recording studio (not the technique but the facilities)
~ I've found that the most important thing to have in the studio is an engineer with a great set of ears. A place can have the latest and greatest, state-of-the-art equipment, but it won't mean a thing if the engineer doesn't understand how to get the sound you're looking for.

Are you still nervous before going on stage and if so, do you use any "rituals" to calm you nerves.
~ When I do it, leaving myself enough time to relax for a few minutes once I'm set up and dressed for the show helps me to be calm.

What was the most memorable day in your musical career and tell us why.
~ I've been around a long time so it's hard to pick just one. Little Charlie and the Nightcats getting signed to Alligator Records in 1986 would have to be right up there. Another would be the Nightcats' first trip overseas back in the '80s. The day the first Rick Estrin and the Nightcats Alligator CD, with the post-Little Charlie incarnation of the band, was released was a another memorable day for me. I have fond memories of days when a particular song I was writing finally came together. Some of the most personally meaningful memories would be of times spent with people like Robert Lockwood Jr and Muddy Waters. Their encouragement, compliments and affirmation that I was on the right track still mean the world to me. I could go on and on. Like I said, I've had a long career. 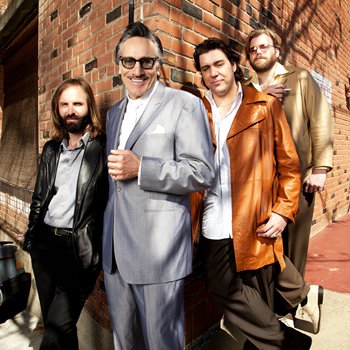 For more info about Rick Estrin you can go to: