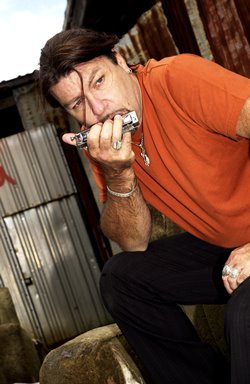 How did you discover the bluesharp ?
~ My Grand father was a great lover of traditional blues music and he introduced me to the harmonica when I was ten years old. He gave me my first harmonica.

If everything would be possible (waking the dead included) , which bluesharp player would you invite for a jam session?
~ I would love to invite Little Walter and Sonny Boy Williamson II (Rice Miller) to my jam session any day!! Both are great innovators of the blues harp and an inspiration for my playing!

What is your favorite blues harp brand / type and tell us why?
~ I am currently endorsed by Hohner Harmonicas. I use Big River Harps. Im pretty rough on my harmonicas, so I try to use harps that last. I have a 200 date tour schedule per year and I need harps that can stand up to the rigours of touring.

What are the most important tips you can give to someone who wants to learn to play the bluesharp?
~ I would suggest that new players should listen to recordings of Great harp players from the pioneers to the modern guys like Stevie Wonder, Sugar Blue or John Popper. I would throw in some great guitar players such as Freddie King and Bukka White.

Tongue blocking or lip pursing, what do you prefer and tell us why.
~ I use both techniques, depending on the song and what fits the best with the musical style.

How do you clean your harps?
~ I don't! I go through my harps so quickly, that none last long enough to deserve a cleaning LOL!!!

What is the question interviewers never seem to ask you and...you wish they would? (Please provide your answer as well.)
~ No one ever asks me why I don't play cover songs. The reason I don't play cover songs, is that I want to create new music. Most blues bands play a lot of covers, I guess its easier to get the crowd going with music people are already familiar with. I took the more difficult path. I have always recorded my own songs and performed those songs live. Its a harder path but in the end very rewarding, because fans learn to love your music. They relate the song lyrics to their lives and in some cases my songs help them through a painful experience. To invoke an emotion from your audience is a wonderful thing to experience!

Describe the ultimate recording studio (not the technique but the facilities)
~ I have been in many many big and fancy studios in my life. Obviously top class equipment is important. So I like Neve Console, Harrison Broadcast Console, Pro Tools HD3, Neumann U48 microphones, Echo Plate stereo reverb and so on. I think for me its not just about the studio equipment or the size or fame of the studio, its about the relationship with the sound engineer that makes the recording studio a good fit for me. For my last four CDs I have recorded at Big Sky Recordings in Ann Arbor, Michigan, USA with engineers Gregg Leonard and Geoff Michael. Both are great engineers, who really listen to my music and my ideas. I feel very relaxed with these guys and this brings out my best work.

Are you still nervous before going on stage and if so, do you use any "rituals" to calm you nerves?
~ I rarely get nervous before a show, but every now and then I do get hit with a wave of nerves. Usually if its a really big concert, say 20 000 people or a big televsion show. I do alot of Yoga, so I practice some deep breathing techniques to calm myself down.

What was the most memorable day in your musical career?
~ Thankfully there here have been many memorable days in my career. Ive played for the Queen of England, I received a Gold Record for "Sailing Australia", I've received a swag of music awards and I played some stadium gigs with "Journey". But the most defining moment in my musical life happened at the very begining of my career! As a very young man I was asked to play harmonica with the legendary Muddy Waters on his Western Australian tour. I made the mistake of playing a solo on "King Bee" with out being told to by Muddy. I was a little over excited and I played the tune just like the format on the record. Muddy yelled at me, pointing his finger "I'll tell you when to play Boy" in that deep booming Mississippi accent !!!! This interaction really made me humble. I learn't how to back a solo artist, later on I learned how to be a solo artist. I have always strived to give it my best regardless of how I feel or whether the gig is big or small. 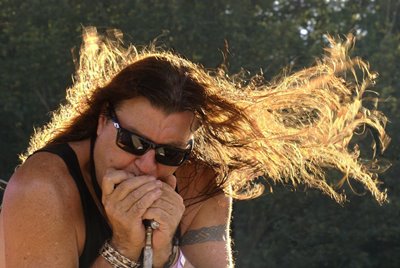 For more info about Peter D. Harper you can go to: