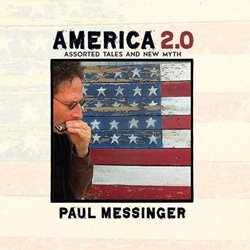 How did you discover the bluesharp ?
~ My father used to play a little harmonica. He'd play straight-harp stuff like "Red River Valley" around the house and I'm quite sure I heard that 'sound' very early as a boy. He used to keep his harmonicas in his night-table drawer, and when he and my mother were out I'd go in there and play with them. Afa actually playing though ... One night when I was 21, things went sour with a girl I was living with, in Key West, in the spring of 1974. She had a son who had a few harmonicas that his father had given them. Walking out I saw them on the hall table and grabbed one. I sat on the porch that jasimine spring evening in Key West in 1974, miserable, as that relationship was about to crash, and put the harmonica to my lips and out came ... MUSIC ... Maybe just an accident, but it sounded great, and most importantly felt great, and I played that thing all night long. Within six months I was playing shows and sitting in with national bands such as 'Big Twist and the Mellow Fellows' that came to Key West ... and so it goes ...

If everything would be possible (waking the dead included), which bluesharp player would you invite for a jam session?
~ Little Walter, without a doubt ...

What is your favorite blues harp brand / type and tell us why?
~ I play Hohner harmonicas customized by Joe Filisko and Richard Sleigh, mostly Marine Bands and Special 20's ...though I occaisonally play other composite component harps customized by other folks ...

What are the most important tips you can give to someone who wants to learn to play the bluesharp?
~ Figure out how to play one note at a time, then figure out what you can figure out on your own, before you get involved in the enormous amount of 'support' available. Get your 'own' feel and your 'own' sound before you start copying other players ...

Tongue blocking or lip pursing, what do you prefer and tell us why.
~ Each has its' own pluses and minuses. Tongue-blocking gives a fuller, richer sound, but limits speed, bending, and overblow (if you want to play that way) accuracy, as well as ability to play the blow-bends with the kind of punch and precision I like best ... I use both, as well as U-Blocking ... whatever gives the best combination of tone and control ...

How do you clean your harps?
~ Don't use water or beer. Take them apart and use a Q-tip or soft cloth, can use alchohol ...

What is the question interviewers never seem to ask you and...you wish they would? (Please provide your answer as well.)
~ What advice would you give harp players sitting in with a band?
The best advice I can give comes from personal experience.
A friend of mine, a pretty good blues harp player btw, owned a restaurant. One time, he booked the great New Orleans player Johnny Sansome as a favor in the middle of the week because the gig Johnny 'thought' he had got cancelled at the last minute, and they were stuck in North Carolina without a gig, etc. My friend decided that what he 'really' wanted out of that night was to have 'me' jam with Johnny Sansone and his very hip 4-piece band. Now, at that time I didn't know Johnny, nor did he know me, and as we were introduced it was pretty apparent that Johnny wanted no part of jamming with a harp player he didn't know, so he said he'd play squeeze box and sing, and gave me his harp mic.
As the band started into their opening groove, I laid out for the first cyle of changes to get an idea what was going on. Then, as the band rolled to the top again, I started playing the part that the BASS player was playing. It was simple part, but adding the harmonica gave it a real punch. The harmonica is an octave above the bass, and the two instruments sound really good together. The band members, to a man, spun their heads around like they were on a swivel, and all broke out into huge grins, Johnny included. That song ended up going for 15 or 20 minutes, Johnny of course played harp as well, and it went really well. I saw Johnny again about 15 years later at a SPAH convention in San Antonio, and he still remembered that night.
So, if you are in a playing situation with a band you don't know, listen first, then try to pick up a simple part that one of the other players are playing, and the band will feel like you know what you are doing, and you will then be welcome to play more ...

Describe the ultimate recording studio (not the technique but the facilities)
~ Well, it depends on what kind of music you are going to record. Is it acoustic or electric, for example? Some players insist only recording in an analog studio, for example. My thought is that it's more inportant to have an engineer that understands how to record harmonica, than the gear (or room) he or she uses to record it. Otherwise, it's a good idea to have a studio with high ceiling 12-14 minimum for the drums, and some sort of layout where you can get some sound separation.

Are you still nervous before going on stage and if so, do you use any "rituals" to calm you nerves?
~ I guess I've never been 'nervous' in performance, so to speak. However, mostly I try to concentrate on 'what' I have to do, get immersed in the details, and that pretty much takes care of any possible performance anxiety. Secondly, I make it a point to try tofirst focus on playing 'music' with the 'band' rather than focusing my attention on the audience. When people see you 'playing' together as a band, they feel included, and the rest of it works itself out ...

What was the most memorable day in your musical career?
~ My most memorable day is whatever moment I've experienced 'next' ... I honestly don't look back ... What excites me most is whatever it takes to figure out the 'nex't thing I'm working on ... In my case, it's usually the 'next' song that I'm working on in the recording studio, or preparing for the 'next' show ... For more info about Paul Messinger you can go to: