How did you discover the bluesharp ?
~ My uncle is musician too, and since I was born he was playing me music, all kinds... rock, blues, flamenco... so when I was around 13 I started to full around with many instruments. At that time he was really into blues and I remember hearing one of his records with Sonny Boy, Jimmy Page and Brian Auger and going crazy with the sound of the harp. Also the mother of a girlfriend played me Room to Move and I instantly felt in love with the instrument,i dont know just watching it in the palm of my hand ,it was like magic... although my grandpa came from the south and the flamenco tradition, my parents, as new generation, were listening to the Stones,Canned Heat, Jimmy Hendrix and all of that, so its like I was hearing things related to blues since I was born. Then I started discovering by myself the old bluesman, and I became crazy for that... also spanish harp legend and "brother" Naco Goni influenced me a lot, it's the first real good harp player that I saw live and he blew my head. I wanted to be like him!

If everything would be possible (waking the dead included) , which bluesharp player would you invite for a jam session?
~ ufff....so many, so ill just tell about the walking dead ones besides the obvious, like the two Sonny Boys and the two Walters, also Junior Wells, Paul Butterfield, Paul Delay, Will Shade, Jazz Guillum, Sonny Terry.... I better stop ,cause there are too many!!!!

What is your favorite blues harp brand / type and tell us why?
~ I'm happily endorsed by Hohner and I like all the models ,but my favourite are the Hohner Crossover and the Marine Band deluxe. For my style of playing I prefer wood, but plastic is also cool for doing modern stuff.

What are the most important tips you can give to someone who wants to learn to play the bluesharp?
~ Well, I dont know if I can do promo here but I have a nice courses web site in internet in Spanish and English called Harp & Soul www.harpandsoul.info where I cover from how to hold the harp to overblows, amps, styles and history, repairing and tunning harps etc etc and soon we gonna put out a course on Latin music on the harp - but besides that - I would tell everybody that start to learn any instrument, that don't follow that western world bullshit mentality about music...the classic,"no I m not good enough", "I feel embarrased to play in front of you", or worse: "I'm frustrated cause I cant achieve whatever technic". In other cultures they dont have that, they just see the music as fun, only if they get very good with it they think about playing a concert or whatever... In my opinion, when you first start to learn an instrument it is not about achieving anything, or about beeing popular playing in front of your friends .... It is just about you and your instrument, that's the only important thing, having fun with that simple thing. I never thought about beeing pro, I was playing in the street one day and somebody offered me a gig in his club, and then another and another... but my first and only intention was to have fun just me and my harp.

Tongue blocking or lip pursing, what do you prefer and tell us why.
~ That's the million dollar question! I like both and I think if you wanna be good in this you gotta master both and that both come naturally depending on what riff or line you gonna play.

Give us the 3 most important albums every (beginning) blues harp player must buy.
~ That's as hard as number 2 LOL! I'll tell you the ones that did it for me obviously are more than three, and it don't mean that they are the most important or the best ones, but these are some of the ones that most influenced me: Fred Mcdowell & Johnny Woods, for that Mississippi acoustic harp, Paul Butterfield Live, I used to hear that when I was starting doing gigs and imagining myself sounding like that on the stage, and I gotta say Harp Attack... cause you got James Cotton, Junior, Carey Bell and Billy Branch in the same record, what else can you ask for! The records of Luther Snake Boy Johnson with Tony Cagnina on the harp, he was not a so well known harp player but for me he was top, the way he could back up and play for a band was perfect. Also Charlie Musselwhite's record Continental drifter showed me how to mix blues harp with latino music....ooops thats already 5...LOL

How do you clean your harps?
~ Just with normal water and a little tooth brush every once in a while when I open them for tunning or something.

Describe the ultimate recording studio (not the technique but the facilities)
~ Since a year or so, I realized that you didn't have to be a genious or have lot of money to do your own pro harp recordings at home, so since then all my harp overdubs I do them at home, relaxed whenever I want and not looking at the clock, but if I have to record my band or with several musicians at the same time, I like a studio that of course have good stuff, but very important is that is chilly, with a good vibe and that the sound engineer is calm too. For recording I think thats the most important. My favourite in Berlin is Paul Linker studio from my friend Alex Ott

Are you still nervous before going on stage and if so, do you use any "rituals" to calm you nerves?
~ After so many years nervious maybe is not the word, it's more like concerned or focused, although at some point the feelin can be similar to beeing nervous it's different, but it's funny cause for me the easier gigs are the bigger ones. When you play in a big stage with thousends of people, you just see people - you interact with a crowd - but when you play in a club, there can by eye contact with most of the individuals... I dont know, it's much more personal. It's like in the street when I started and was busking. I think that gives you a lot of confidence, cause if you get to make people stop and listen to you, then when you are in a bigger stage, where they came to see you, then its really easy compared to that. I think that every musician that wanna go pro and do festivals and stuff, have to play first in the street. I think its a must, to become a stage musician. About rituals: I do different things depending on the gig as sometimes you have a cool backstage to chill or other times you are just in the small club at the bar laughing and talkin with some friends that came to see you.

What was the most memorable day in your musical career?
~ About places or events I would say many but to play in the Kinshasa Jazz Festival in Rd.Congo was a blast... There I understood another meaning of music... Also to play two times straight in the World Harmonica festival in Trossingen as a harmonica player I think is for sure one of the biggest honors. Also to play in Chicago, in Buddy guys Legends, Rosas...all this clubs or the parties in the south side...it's one of the capitals of blues so its like a Mecca for a blues player. About people that I performed with, I can name many that I never even dreamed that I would meet: Buddy Miles really changed my life. I learned a lot from him, performing or seeing how he worked in the studio and encouraging me... Also to record or play with legends like Charlie Musselwhite, Mick Taylor etc was life changing... but when I started playing gigs, my only dream was just to play with the best blues bands in Spain, the Tonky Blues Band or Malcom Scarpa & Naco GoNi, so that was very special for me when I did it. And of course with my own projects, Los Reyes del Ko or my mexican latino band Los Mighty Calacas we had memorable nights. 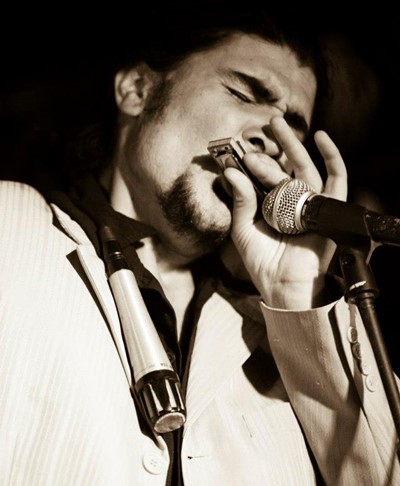 For more info about Marcos Coll you can go to: