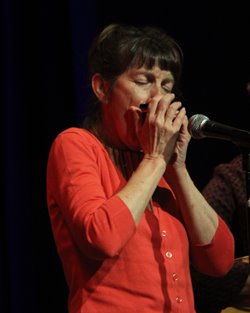 How did you discover the bluesharp ?
~ I was living near Portland ,OR. I heard Paul deLay playing harmonica and I knew it was something I wanted to persue. Not only was Paul deLay an inspiration and a mentor to me, he was funny, smart and always listening for the best. He was a master musician and harmonica player, but always took the time to support others.

If everything would be possible (waking the dead included) , which bluesharp player would you invite for a jam session?
~ Jerry McCain. Mr Jerry was a dear pal for many years. I sincerely regret that I wasn't able to visit him towards the end of his life. I would love to hear his voice just one more time.

What is your favorite bluesharp brand / type and tell us why?
~ I used to play/like regular old Marine Bands, but have decided to try a custom Marine Band from Joe Filisko and a custom Special 20 from Richard Sleigh. I guess the bones are Hohner products. I really dig old Marine Bands and old Special 20's. I bought a Deluxe and a Crossover recently but they didn't work for me...they were mail order. I might try a Seydell if I can get a good price!

What are the most important tips you can give to someone who wants to learn to play the bluesharp?
~ Listen to what you want to play....if you want to play BLUES listen to it! Listen to everybody and find just one player you want to sound like, then just listen to that player. Learn what you can, copy what you can, but learn to listen so you'll know if you're even close or not!!! Ask someone better than you for a lesson! Learn to listen... and practice every day. Listen to your playing with a critical ear, judge your own playing against what you want to sound like, and work towards the goal of sounding better.

Tongue blocking or lip pursing, what do you prefer and tell us why.
~ I do both. It's very important to have your tongue close to the comb even when not tongue blocking. I don't hear a difference in great players who do one or the other exclusively, they are great players. But I do both....I think most folks do both.

How do you clean your harps?
~ Rubbing alcohol soft cloth and tooth-picks. I never take them apart any more.

What is the question interviewers never seem to ask you and...you wish they would? (Please provide your answer as well.)
~ Q: Who is the "Kinzel" of Kinzel and Hyde? A: That is my partner and husband Stu Kinzel, whom I met after playing four years. Stu taught me about listening to what he was doing and learning a part to play within it. He showed me that to love a piece of music is to respect it enough to play it well, and the ultimate respect one musician gives another is doing that person's music well.

Describe the ultimate recording studio (not the technique but the facilities)
~ Mick Jagger's island would be nice! Or Muscle Shoals Sound Studio....

Are you still nervous before going on stage and if so, do you use any "rituals" to calm you nerves?
~ No, I am not nervous and have no rituals. I used to drink a bit, but quit a long while ago.

What was the most memorable day in your musical career?
~ My most treasured moment was performing for my Mother and Paul deLay (among others) at a harmonica exhibition. My Mother was a fine musician and singer, And she thought I was crazy for embarking on a musical "career" at 37 years of age with no training or music education of any kind. My Mother came to this event and listened to all the harmonica players, and Paul said "She has really good tone, and you can't buy that!"...it meant so much to me that my Ma understood how devoted I am to blues harmonica, and that someone she admired as a harmonica player thought well of me. They have both passed on and I often think back to that night....special also because of harmonica ACES Bill Rhoades and Jim Wallace, who both mean the world to me. Bill Rhoades hosted the event that my Ma came to, and it was an incredible night. For more info about LynnAnn Hyde you can go to:

Answers given on April 19, 2016
Photo LynnAnn playing the harmonica by Greg Johnson