How did you discover the bluesharp?
~ Someone gave me one in passing, I can't recall the occasion but I was immediately drawn to it. A few days later I went on a camping trip to a bioluminescent island off the coast of NC and brough it with me. It was a full moon, I went out to the edge of the beach from my camp and decided to play around with it, still not aware of how to make any real melody or have any control of sound. Eventually the tide came in and I was separated from my camp by a long river of water. It was night time and I suddenly felt scared to cross the dark water. I had the harmonica in my hand still and in that moment it felt like a saving grace. I stood on the edge of the water breathing in and out of the harp and started slowly entering the water. In some way it felt that I was safe as long as I was playing the harmonica but as soon as I stopped I'd be swallowed whole by the ocean and this river of water cutting across the island. By the time I reached the other side and my camp, the harmonica had become an extension of my breath. Something had clicked and I was playing as I play today. It was as if I downloaded the understanding of the instrument crossing the water, and from that day it has been my go to instrument.

If everything would be possible (waking the dead included), which bluesharp player would you invite for a jam session?
~ Little Milton.

What is your favorite bluesharp brand / type and tell us why?
~ My favorite is Lee Oskar Harmonicas. They always have been, I always loved the tone and how rich the sound was when you bent the notes and really dug in. I love that you can replace parts and that it feels like a real instrument, not a cheap toy as so many of them do. I also love that there are options available that really lend themselves to exploring the harmonica as a "melody maker" and can evoke sounds that are more reminiscent of a saxophone or flute then the typical blues sound. I always played a Lee Oskar but now that I am a featured artist with them, I love them even more since I know their story and the people behind them.

What are the most important tips you can give to someone who wants to learn to play the bluesharp?
~ Don't over think it. It is an extension of your breath. It's a percussion instrument. Start there and the melodies and control will come.

Tongue blocking or lip pursing, what do you prefer and tell us why.
~ I would have to say tongue blocking because I can get deeper drawn out tones.

How do you clean your harps?
~ With Q-tips and alcohol and I take them apart if needed. I honestly am not over zealous with cleaning them as I feel some of the accumulated grime gives character to the tone (within hygienic reason of course! ;-).

What is the question interviewers never seem to ask you and...you wish they would? (Please provide your answer as well.)
~ I would like to be asked "Where would you like to see the instrument go as far as it's role in popular music?" My answer would be " I think harmonica has historically been associated with blues and folk music but never as a lead instrument or sound to base a song on. I'd like to see it explored in that way, perhaps utilizing pedals and experimenting with keys and approach to create unique loops and melodies that can work in RnB, Pop, Soul, Electronic etc. and still feel authentic. "

Describe the ultimate recording studio (not the technique but the facilities)
~ To me it's not so much the building, although I love old churches that are converted into studios. The ultimate recording studio would contain some of the best that vintage and analog has to offer, preferably with some music history attached (i.e. Jimmy Hendrix used this amp). This facility would also contain some type of garden or escape so you can sonically step away, clear your audio pallet and perhaps gain some inspiration and continue flushing ideas or starting new ones. It would offer a few different rooms depending on the scale you are looking to achieve and plenty of food, tea and bourbon scattered throughout to lend in the process.

Are you still nervous before going on stage and if so, do you use any "rituals" to calm you nerves?
~ Being on stage for me is the comfortable part. I feel at home there. It's often the before and after that can be nerve wrecking. If I ever do have any nerves I usually calm them by going off by myself, warming my voice up and reminding myself why I do this.

What was the most memorable day in your musical career?
~ There have been several...there was one in particular I revisit when I need affirmation to keep going on this path. I was in Atlanta at a recording studio and I was waiting in the lobby to be taken back to the specific studio I was going to work in that day. I decided to start warming up my voice in the lobby with a song I had just written and was going to start working on that day. My back was turned to the door leading into the main Studio A room and my eyes were closed. Suddenly someone came up from behind me and grabbed my arm, I swung around abruptly and it was Whitney Houston. She was holding my arm with one had and a small dog with the other and looking me square in the face under a white ball cap. She looked at me with focused eyes and said "Keep singing." I was in shock and also unable to not keep singing for fear of passing out. Next thing I know she puts the dog down, grabs my hands, and starts singing with me, harmonizing. She stops suddenly and asks me my name. I tell her in my most collected voice, and she tells me I have great tone. She steps back and takes a long look at me. There are other people in this lobby, also waiting, also now in shock at what was happening. She pulls me in closer and gets as close to my face that I can see the colors in her irises and tells me "Never stop singing, you got it, just please, don't stop." She hugs me and gives me the biggest smile. Picks up her dog and turns to return to her session. By now her security is looking concerned and ushering her back in. I'm probably trembling. She turns back around and says bye and winks at me then disappears. I sit on the couch in the lobby while everyone stares at me. I get a call it's time for session and I walk down the hallway. I make no sound until I reach the stair well, once alone I take a moment to soak in what just happened. My childhood idol just gave me the biggest affirmation I ever had, telling me that this was my path. I still think about that moment in times of doubt or discouragement. No matter what anyone else says, Whitney Houston thinks I have good tone :) 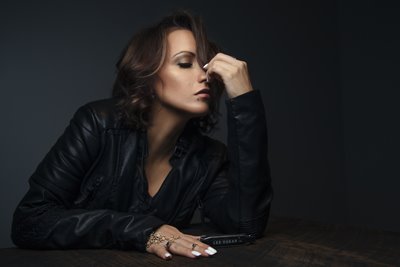 For more info about Laura Reed you can go to: