How did you discover the bluesharp ?
~ When I was in my late teens, I and my friends had a Led Zeppelin tribute band and I was the singer. Robert Plant played quite a decent blues harp and that's when I fell in love with the instrument. It wasn't until later, however, that I started studying harp more seriously.

If everything would be possible (waking the dead included), which bluesharp player would you invite for a jam session?
~ Dennis Gruenling, if we talk strictly about blues harp.

What is your favorite blues harp brand / type and tell us why?
~ I now play Hohner Marine band customized by Thomas Hanke. I like my harps to be very responsive and he does a great job setting them up. For an out-of-box harp I wouldn't go for Marine band, I don't understand why they still make them with nails rather than screws. Golden melody would be my choice.
I have never been a hard blower so I didn't find any liking in more robust harps but I should give them a try I guess. I remember I started with Lee Oscars and found them reasonably easy to play.

What are the most important tips you can give to someone who wants to learn to play the bluesharp?
~ Copy great players and find someone to give you relevant feedback. Many players are too confident about their playing but there are always so many ways to improve. And, don't just listen to harmonica players. On one hand, it might be just what you are looking for, but on the other hand, you are cutting yourself away from so much wonderful music that might enrich your playing beyond the traditional blues harp clichs.

Tongue blocking or lip pursing, what do you prefer and tell us why.
~ It depends. I lip purse when I play jazzier stuff. I find it easier to play faster and freer. When I am in a traditional blues setting, however, like playing with a Chicago blues band, I will usually switch to tongue-blocking.

Give us the 3 most important albums every (beginning) blues harp player must buy.
~ These are the three most influential bluesharp albums for me
Carlos del Junco - Blues Mongrel
Jason Ricci & The New Blood - Blood on the Road
Kim Wilson - Smokin' Joint

How do you clean your harps?
~ I don't clean my harps as often as I probably should and I'd rather not say when I last cleaned a harmonica of mine. I prefer playing the instrument to doing mechanical sort of work. But when I do clean a harmonica, I brush it with a Curaprox supersoft toothbrush dipped in alcohol and then give the reed plates alcohol bath.

What is the question interviewers never seem to ask you and...you wish they would? (Please provide your answer as well.)
~ I would like people to ask me about something unrelated to the harmonica. Something about my process of creation and music as such.

Describe the ultimate recording studio (not the technique but the facilities)
~ So this is the way I see the ultimate recording studio. It has four separate rooms to record clean single tracks when necessary. And you can see your bandmates at the same time. The ultimate studio is neat and tidy, has a large sofa in the mixing room and kitchen facilities. A good recording engineer is a must. And I don't just mean a technician. I mean someone who can give good advice - someone who can give a "producer's" perspective on the material you are recording. Sing this differently, try doing this, I like this take because ... that sort of thing.

Are you still nervous before going on stage and if so, do you use any "rituals" to calm you nerves?
~ I am still nervous and I think it's good to be slightly nervous; it helps to increase the adrenaline level and give a good performance. The best thing to do in order not to be nervous is to study your material properly and practice to the point when you are really confident. It's funny but oftentimes the audience is more impressed by how confidently you play something rather than by your skill.

What was the most memorable day in your musical career?
~ My most memorable day was when I got to perform with the Slovak philharmonic orchestra. We did a film music concert and the bit I got to perform, of course, was the classic western movie Once Upon the Time in the West. Usually, people play the harmonica intro ad libitum, but my part was written and it was in 5/4. I'm not a fast "reader" and so I studied the thing properly. In hindsight, it probably wasn't the most difficult thing in the world, but it was my first time with an orchestra so, naturally, I didn't want to mess up. It went beyond expectations. 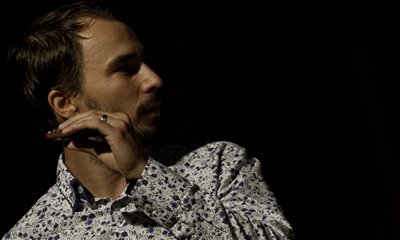 For more info about Juraj Schweigert you can go to: