How did you discover the bluesharp ?
~ The first time that I ever recall being knocked out by the sound of the harp, and being compelled to actually go out and buy one was in 1970 when I heard Keith Relf and the Yardbirds doing "Smokestack Lightening". Though I could play the guitar a little, I really didn't know much about music. But I went to the music store and bought an "A" harp, which luckily happened to be the correct key for playing the blues in "E". That first harp was a Hohner Blues Harp, and cost about $2.50.

If everything would be possible (waking the dead included) , which bluesharp player would you invite for a jam session?
~ Because I've always gravitated more toward the country roots or country blues sound than Chicago blues, my playing has evolved more in that direction. Probably the first player to have a true influence on my playing was Sonny Terry, of Sonny Terry and Brownie McGhee. From there I went full out country rock in the seventies, stealing as many licks as I could from Charlie McCoy. Later, I listened religiously to Mickey Raphael, Norton Buffalo, Terry McMillan, Fingers Taylor and others. One of the things I wish I had a copy of from my Travis Tritt years was a picture taken backstage with Jimmy Hall, Fingers Taylor, Mickey Raphael and myself.

What is your favorite bluesharp brand / type and tell us why?
~ Since the eighties I have primarily used Hohner Golden Melody harps. I usually play on a vocal mike on a stand, and use my right hand to whack the side of the harp in a rhythmic, percussive style I call "chuckin". I've always preferred the comfortable, rounded edge of the Golden Melody for this technique, and for many years its plastic comb and tight compression made it the best harp for my style of playing.

What are the most important tips you can give to someone who wants to learn to play the bluesharp?
~ I learned to play by ear, and as such still have a rather limited technical knowledge of the harp and its mysteries. But early on I carried a full set of twelve keys (plus the High G octave) in the car. Using a Master Key chromatic pitchpipe, I would quickly determine the key of every song on the radio and then play along with each. When out and about, I begged any band that I encountered to let me sit in and play a few regardless of their style. So my playing evolved into more of a clean accompaniment style, filling the holes within the holes, rather than the more aggressive, balls to the wall, distorted harp favored by blues players.

How do you clean your harps?
~ I've always found an ounce of prevention is the best course for keeping harps clean. I keep them in a foam lined case, knock the moisture out during and after playing, and always observe good harmonica etiquette by which I mean NEVER letting anyone else's lips touch my harps. I haven't soaked a harp in beer or any other liquid since the wooden combs of the early seventies.

What is the question interviewers never seem to ask you and...you wish they would? (Please provide your answer as well.)
~ I'd like to get the discussion going about how ridiculously expensive harps have become. I mentioned that I started out learning to play with a full set, which at that time ran about $50. Today that same setup will set you back about $550, and harps are not a one-time purchase like a saxaphone or guitar. If that same rate of inflation holds for the next several decades, a novice harp player will be looking at over five grand for a full box of harps. One of the most frequent relics found on the old battlefields of the American Civil War from the 1860s are harmonica reed plates. In addition to being infinitely portable, they were so affordable that everybody could carry one. Nowadays, I worry that harps are fast becoming so expensive that fewer potential players will make the lifelong commitment.

Describe the ultimate recording studio (not the technique but the facilities)
~ As you know I've recently recorded and release my debut album, "Nicer Guy". Being a songwriter, I did not want to make a harmonica album, but an album about the songs where the harp contributed along with a variety of other instruments and stellar players. While I can't really wax eloquently about studio techniques and setups, I will say that I have treasured every opportunity over the years to get in the studio as a player. There is such a heightened creative atmosphere that magic frequently occurs.

Are you still nervous before going on stage and if so, do you use any "rituals" to calm you nerves.
~ I rarely have a case of nerves if I'm stepping onstage as a harp player. I've always felt that I could join any artist onstage and make them sound better. In fact, that has been my goal as a sideman from the very beginning.

What was the most memorable day in your musical career and tell us why.
~ I do have some fantastic memories. Two years after leaving the Tritt band, retiring from the music business and moving to Prescott, Arizona to practice Rolfing Structural Integration, I went to visit Charlie Daniels in his dressing room at his afternoon sound check. He not only invited me to come and sit in for a few at the big show later that night, he had the crew set me up and asked me to play the entire show. Not a bad way to break in a new town! Then there was that time in '96 at the Fox Theater in Atlanta, Georgia when Country Club (minus Travis Tritt) worked as the house band for Lynyrd Skynryd's concert for the debut of "Freebird, The Movie". How many players have actually had a chance to play "Freebird" onstage WITH Skynyrd? 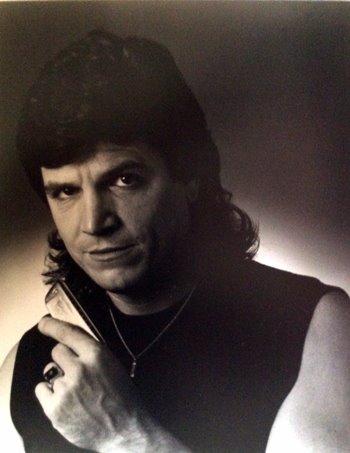 For more info about Jimmy Ruggiere you can go to: