How did you discover the bluesharp ?
~ There was a period in my childhood when I was mainly listening to blues and hiphop, altering between Muddy Waters and Wu-Tang Clan. I didn't pay particular attention to the harp in the blues, but it was there. I remember that I enjoyed the raw, crackling, back alley kind of sound those old records had, it sounded so different than anything else at that time. It was not before high school that I bought my first harp. Me and my friends had this esoteric folk band and I was looking for some new sounds for it. I had a strong urge to play, but wasn't really good at anything. I had played many instruments, but nothing stuck. So I tried the harp, and somehow it spoke to me right from the start. I knew that this was the one. I just sat down and started rehearsing more stubbornly than ever before. It's crazy to think that to this day, I've played the guitar years longer than the harp. Somehow the harp chose me, and I found my musical voice with it.

If everything would be possible (waking the dead included) , which bluesharp player would you invite for a jam session?
~ From all-time greats, I would have to say Sonny Terry, as he was my first true harp idol. From the present day players I'm going to say Jason Ricci. He has incredible tone and execution both acoustic and electric. If it wouldn't be restricted to blues harp, my answer might be different. My number one chromatic player has always been Hugo Diaz, the Argentinian tango artist. Nobody has brought that instrument to life for me quite like him. He was the main reason I decided to focus on the chromatic too, and still the most mesmerizing harmonica player I've heard. But it's very hard to decide, as there are so many great players! If you would ask me tomorrow, I might name entirely different artists.

What is your favorite bluesharp brand / type and tell us why?
~ I play various models and brands from Hohner to Suzuki to Seydel and others, and I'm always curious to try new models. In my current set I have several Hohner Golden Melodies with the comb changed to corian plastic. They work for me. I need the equal temperament tuning for my melodic playing. If I play the blues, I'll play almost anything that growls. Nothing beats the crisp sound of a Marine Band in A, that's for sure.

What are the most important tips you can give to someone who wants to learn to play the bluesharp?
~ A couple of years ago I wrote a book about the cultural history and playing techniques of the harmonica (in Finnish). To quote the last lines of the epilogue: "If from all the instruments in the world you have chosen the harmonica and decided to play, you are too crazy to stop. Go all the way." It all comes down to persistence. Nobody is going to do the work for you.

Tongue blocking or lip pursing, what do you prefer and tell us why?
~ Both. Well most of the time I play lips pursed as it gives me the needed speed and precision with the overbends. But the tongue plays a major role in the overall sound. It's responsible for many effects, tricks and nuances that make the sound come to life. I play octaves, interval leaps and lots of other stuff that require tongue blocking. So I don't really like to think of it as an "either-or". I love the fat sound of fully tongue blocked playing. On the other hand, even a technique that gives you the thinnest, tightest and the most "unwanted" sound might prove useful in some contexts. I'd like to be able to use the whole palette creatively.

How do you clean your harps?
~ I'm lazy what it comes to any kind of harp maintenance. Sometime it seems like all the harp players around me have a whole laboratory dedicated to harp repairing, cleaning, customizing, filing, tinkering... I'm not a handyman at all, I just want to play. I use the basic tools to remove excess gunk every now and then. Even the basic tuning process is a burden to me. I do the bare minimum to get the harp play the way I want. For anything beyond that I gladly consult a customizer or other professional.

What is the question interviewers never seem to ask you and...you wish they would? (Please provide your answer as well.)
~ Harmonica people like to discuss harmonica players, but rarely ask about other influences. If one would ask me about the influences of my Middle-Eastern styles of harmonica playing, I wouldn't probably even mention harmonica players. I listened to the Turkish ney flautist Mercan Dede, klezmer fiddle and clarinet players like Perlman, Brandwein, Krakauer, Tarras... In the blues, the harmonica is more prominent of course, and the tradition sort of gives you more hints and tips on how to play. That's why the blues usually forms the "syllabus" of diatonic harmonica technique. It's wonderful, really, but I also enjoy stepping on territories that don't have guidelines yet. There's incredible freedom in both the absolute tradition and in experimenting without borders.

Describe the ultimate recording studio (not the technique but the facilities)
~ As a Finn, my first honest thought was a good sauna. There's nothing like hitting the steam after a full day of studio hassle (or a gig). The tranquility of a good sauna puts your earthly doings in a larger perspective. Also I need lots of good coffee to stay sane; the darker the roast, the better. A nice patio close to the nature, good food, and a sound guy who knows his job. If these basics are met, I'm happy.

Are you still nervous before going on stage and if so, do you use any "rituals" to calm you nerves.
~ I'm pretty confident as a performer and usually don't stress about going on stage anymore. Maybe the years of clowning in red leather outfits and leopard leggings doing bad acrobatics and playing viking techno helped me lose the remaining inhibitions I had. Self-humiliation gives you immunity in a way. I've been more insecure about my voice though, but it's getting better the more I sing. Singing is the most fragile of instruments, and if you're tired or depressed or sick or whatever it's hard to conceal that. It's more YOU than anything. There's no leopard leggings for your voice.

What was the most memorable day in your musical career and tell us why.
~ Everything that has happened to me combined. Sometimes it's still hard to fathom that this small instrument has taken me to different countries, road trips, Estonian biker clubs, midnight street playing sessions by the Bosphorous, accompany silent films, dance, theatre...And to win the 3rd prize in World Harmonica Contest in a small Southern-German village full of harp freaks. There's incredible mojo to the harmonica, sometimes it feels like magic. I hope there's plenty of magic and memorable days still to come. 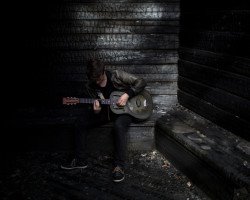 For more info about Jantso Jokelin you can go to: