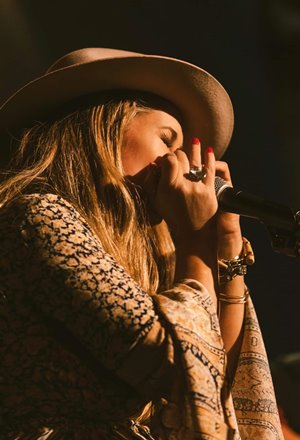 How did you discover the bluesharp ?
~ I discovered the harmonica from my Grandfather Clarence Wright, who played more straight harp and was quite skilled at it. He played the old campfire type songs like Red River Valley and such, but I knew at the young age of 4 or 5 that I LOVED the sounds and tones of the harp and wanted to learn more! It was the most lonesome sound I'd ever heard and I was hooked. We were hard core Country Music lovers in my family, but I started going to the local record store and spent hours listening. It was there that I discovered The Blues. I bought records from Sonny Boy, Little Walter, Howling Wolf, James Cotton, Charlie Musslewhite, Mickey Rapheal (Willie Nelson), John Mayhall and the Blues Breakers, Stevie Wonder, Paul Butterfield, The Rolling Stones, and Charlie McCoy was my favorite Country harp player. Toots Thielmans was also a huge hero and influence. I took one proper lesson from a trumpet player in my hometown in Northern California and that was enough to get me started. It's such an internal instrument....in that becoming a good harp player requires lots of practice and one must kind of learn on ones own. I picked certain licks and practiced them until I had them down...and added on from there.

If everything would be possible (waking the dead included), which bluesharp player would you invite for a jam session?
~ I would bring back Little Walter....and soak up every ounce of his groove and chops.

What is your favorite blues harp brand / type and tell us why?
~ My favorite blues harps are Hohner. I have tried so many other brands that are fantastic, but I am a Hohner girl. I still have my Grandpa's old Marine Band harps so I started with those, and then used their Bluesharp after that, but the wood combs were hard on my mouth and lips after hours of practice, so I started using Special 20's. I found them easier to bend notes and they have a full round mean tone that I dig. I still play the Special 20's, but my Hohner rep turned me on to a newer model called The Crossover. I mainly play those now, but mix it up depending on the song. The Crossover is a bit honkier and for the lack of a better way to say it....more ballsy. :). I also love The Rocket line and use the Thunderbirds too when needing to play octaves and such. Between all of these, I can create anything from organ pads to hard core blues harp. Hohner has been good to me as well, and welcomed me into their family with open arms, so I stay pretty loyal to them.

What are the most important tips you can give to someone who wants to learn to play the bluesharp?
~ Tips for new harmonica enthusiasts....find the type of music you love with harp in it. Listen for key licks, start with something simple. Pick out a few major keys like A, D, C, and G at your local music store....and you now have all you need to begin practicing holding your harp, messing with scales, (which is even easier now, cause you can pull up experts on line who can help get you get started becoming familiar with your instrument). And then....practice, practice, practice!!!

Tongue blocking or lip pursing, what do you prefer and tell us why.
~ I tend to play with lip pursing a bit more than tongue blocking, but that's just because of the type of music I'm playing daily. I truly enjoy both! Tongue blocking gives you a totally different bag of tricks, so I enjoy it when I get to play more of that style. As a lead singer, my parts are often quite specific...intro's, some padding, solo's, and outro's, but when I get to sit in with friends bands or am asked to play on someones's records...I get to add whatever the song needs, and often, that includes more tongue blocking technique.

Give us the 3 most important albums every (beginning) blues harp player must buy.
~ Three records one should own if they love the blues....Sonny Boy Williamson II, His Best. Little Walter, Just A feeling Chess Sides 1952-1962. The Paul Butterfield Blues Band. It's VERY hard to choose just three.

How do you clean your harps?
~ I have to clean my harps more than the average Joe, because I'm a woman and wear lip gloss in a nude color on stage and off. I keep lip gloss in all my harp cases....something I don't think my fore mentioned mentors have had to mess with. Haha! I use a Q-tip and Listerine or vinegar. I slap them against my hand to get any loose stuff...and the Q-tips clean the rest quite well. I don't like to soak my harps in soap and water like some do. I leave the reeds alone. I find that my harps last much longer and give me the rich tone I desire without brushing or soaking the insides. I have also used whiskey too, and that does the job just as well for me.

What is the question interviewers never seem to ask you and...you wish they would? (Please provide your answer as well.)
~ The question I don't get asked often that I find interesting is "What's it like being one of only a few women who play the harmonica professionally"? My answer is...I find when I'm able to play shows for all ages, there are SO many little girls who come up and ask me questions about it or parents who want to start their daughters on harmonica and inquire as to how to do so. This warms my heart. I hope more young women pick up the harp and take to it with passion. It's a fabulous, soulful, interesting, and important part of, not just the blues, but music in general. Plus....carrying my harp cases, microphones, (and rig or amp when I choose to) is a whole lot easier and less laborious than any other instrument on stage! Big upside!

Describe the ultimate recording studio (not the technique but the facilities)
~ I like to play in the studio live with the band as I'm singing and it's all going down in the moment. I have cut many records where I chose to overdub my harp parts, and once in awhile, that is still necessary, but I no longer choose to go that direction. I like to set up my favorite amps...and dial them in. I usually play with one of my 70's Fender Champs, Blues Jr, and I have several really old 30's -50's funky small 6" or 8" speakers (such as my Moms 1937 Leilani amp that she played lap steel through) I use those for that mean crunchy tone. I use different mic's for each...a good ol Sure 58, A Shure Green Bullet, Peavey makes an H-5C Cherry Bomb that sounds wonderful, and one of my newest favorites needs no amp. My fiancé found a company out of Texas called Placid Audio that makes copper Mic's. He gave me one for a Birthday or a holiday and I literally don't play anywhere without it. It gives me that gutsy BIG dirty tone, but you can still decipher and hear each note. I love that mic! Other than that I have my vocal mic set up for a clean tone in an isolated booth and I surround myself with all my sound options depending on what the vibe of the song is. This is my favorite way to cut records. After the bands work is done...I'll often move my little circle of sound into the big room and sit down and just go red if I feel like I can beat a solo or wasn't crazy about my tone on something. A big recording studios main room is a pretty heavenly and vibey place to get in the middle of a song and just listen...and play something I may have missed while we were cutting live. Candles and a sip of something good often helps. :)

Are you still nervous before going on stage and if so, do you use any "rituals" to calm you nerves?
~ Yes, I still get some butterflies before I take the stage every time. The day that stops...is the day I'll stop, cause to me...that tad bit of nervousness shows that I care and this performance means something to me.

What was the most memorable day in your musical career?
~ Most memorable day in my career so far? Wow, that's a tough one. Probably the day I got to record and blow harp with Johnny Cash and Waylon Jennings on the first Trick Pony record. We recorded Johnny's 1957 hit Big River and it was one for the record books for me! I played and sang like my hair was on fire....and I was SO nervous!!! Of course, they were both precious and made me feel like a million bucks. I also played through my moms amp, which made me feel like she was with me in a small way. Very special day indeed!! 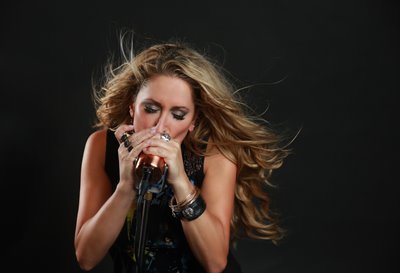 For more info about Heidi Newfield you can go to: