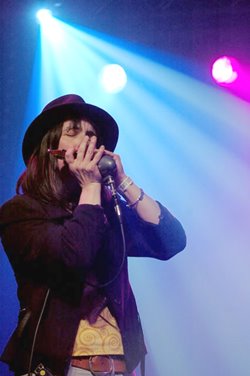 How did you discover the bluesharp ?
~ When a teenager, as an American roots music fan, I was studying the 5 string American banjo while a friend of mine was studying the bluesharp. So he got me in bluesharp, and I started listening to blues harmonica players, mainly Sonny Terry and Sonny Boy Williamson (Rice Miller, to be more accurate). Then I bumped into the "special instrumental - harmonica" recorded by Jean-Jacques Milteau on the famous French label "Le Chant du Monde", and I was hooked! I had to stop playing the banjo after a serious domestic accident, which drove me to concentrate on the harmonica after my university studies..

If everything would be possible (waking the dead included) , which bluesharp player would you invite for a jam session?
~ Now about playing with another bluesharp player at a blues jam, there are (and were) so many great players... But if I had to choose one and only one of them, it would probably be the great William Clarke!

What is your favorite bluesharp brand / type and tell us why?
~ I mainly play Hohner Special 20 and Crossover. They have a big, warm tone, wether you play acoustic or electric. I might probably enjoy other brands of harps, but I am not into trying everything that's on the market, and I stick to Hohner.

What are the most important tips you can give to someone who wants to learn to play the bluesharp?
~ If you want to learn how to play the bluesharp, the first thing you have to work on is your tone! It is part of the fundamentals. You must also do your homeworks and listen to all the harmonica players you can, from the very beginning. You must listen to all the "classic" blues harp players.

Tongue blocking or lip pursing, what do you prefer and tell us why.
~ I personaly use both techniques, but I really like using tongue blocking because it gives you a "thick" tone, but it all depends on the type of music you play.

What is the question interviewers never seem to ask you and...you wish they would? (Please provide your answer as well.)
~ Maybe the question you just asked ......

Describe the ultimate recording studio (not the technique but the facilities)
~ A studio which enables you to get the big electric tone on record, a studio which gives back your original tone, without artifacts.

Are you still nervous before going on stage and if so, do you use any "rituals" to calm you nerves?
~ It depends on the bands I play with, the place where I play, the prominence of the gig, the audience, etc. So it all depends on the circonstances. But I must confess that I am a nervous person by nature, but I have no "ritual".

What was the most memorable day in your musical career?
~ My most memorable day so far was probably when I was invited to play the 2009 World Harmonica Festival in Trossingen, where I was chosen to represent Belgian female bluesharp players. A real treat !!!!

For more info about Geneviève Dartevelle you can go to: