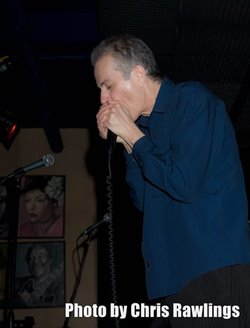 How did you discover the bluesharp ?
~ As my dear departed friend Eddie said to me one time "You didn't pick the harmonica! The harmonica picked you!".

If everything would be possible (waking the dead included), which bluesharp player would you invite for a jam session?
~ I wouldn't invite another harmonica player to a jam session. I would invite a pianist.

What is your favorite blues harp brand / type and tell us why?
~ Hohner Marine Band because it's pretty dependable and the least expensive. I don't like the embouchure on the new so called "DeLuxe" or "Crossover" Marine Band models. And I only play wood. Plastic is too plastic sounding. Real men play wood...hee, hee.

What are the most important tips you can give to someone who wants to learn to play the bluesharp?
~ Tips? Play along with recordings all the time. That's how I learned.

Tongue blocking or lip pursing, what do you prefer and tell us why.
~ When I first started playing in 1965, I bought a book by Tony Glover which was probably the first blues harmonica book on how to play it...the only thing I got from the book is what key I should play along with the band....there was no overblowin', no lip pursing or other technical talk that I remember....so I just play it and stay away from conversations about technique.
I'm also not just a blues player..blues was/is my foundation, specially Chicago Blues ...but I have also played with Cuban bands, Country groups, sat in with Jazz combos and did a gig once with Marty Balin, lead vocalist with the Jefferson Airplane...I just happened to be in the club and the owner introduced me to the guitarist in his group and he asked me to sit in for a song or two...I stayed on the stage for the whole night.

Give us the 3 most important albums every (beginning) blues harp player must buy.
~ The ones that influenced me the most were the first two Butterfield, the first 3 James Cotton on Verve records, the first Charlie Musselwhite (Stand Back!) and the Chicago/The Blues/Today series on Vanguard.

How do you clean your harps?
~ I don't clean them. Someone else does.

What is the question interviewers never seem to ask you and...you wish they would? (Please provide your answer as well.)
~ "Do you lament the lack of jazz feel in today's blues?"...I would answer YES.

Describe the ultimate recording studio (not the technique but the facilities)
~ Big room for recording with a Hammond and a piano.

Are you still nervous before going on stage and if so, do you use any "rituals" to calm you nerves?
~ Not nervous, it's just a job. And no special rituals other than going to the water closet.

What was the most memorable day in your musical career?
~ The day that Dion De Mucci (Dion) came up to me after a gig and said that my harmonica playing was great but that he also really dug my singing. It put a stamp of approval to what I had been doing musically.

For more info about Felix Cabrera you can go to: