How did you discover the bluesharp ?
~ To quote my good friend and harp legend Charlie Musselwhite, music in general "overtook me when I was a little child". While other kids spent their spare time playing soccer or riding bicycles, I stayed inside all day long listening to records. Every kind of music. My favorite toys were a drum, a toy piano and of course an out of tune harmonica. Then one day I saw Paul Butterfield playing "Mistery train" in a movie called "The Last Waltz" and my life changed forever.

If everything would be possible (waking the dead included), which bluesharp player would you invite for a jam session?
~ This is very difficult question! Maybe Sonny Boy Williamson I and II, Sonny Terry, Noah Lewis but I also would like to jam with Robert Johnson and Muddy Waters.

What is your favorite bluesharp brand / type and tell us why?
~ Although I have played every kind of harmonica during my long career I really think that Hohner Special 20 is my favorite (I'm an Hohner endorser). I love the sound warm and full and also the plastic comb is very friendly to my lips.

What are the most important tips you can give to someone who wants to learn to play the bluesharp?
~ I would just say two simple words: be yourself. Steal everything from everybody but then make it your own. Don't act. Be simple and humble. Love and respect people that come to your show. Be nice with them. They will tell you some precious words that keep you going on when the wind of life will blow too hard against you. Play from the heart. Always.

Tongue blocking or lip pursing, what do you prefer and tell us why.
~ I use both, but I probably prefer "lip blocking". I just started that way and I still like it. Most of my main harp heroes played in that way so...

Give us the 3 most important albums every (beginning) bluesharp player must buy.
~ This is another hard question! Every compilation by Little Walter, Sonny Boy Williamson II and Big Walter should be a great start. And from there keep your ears wide open to listen every harmonica player in the world, famous and unknown.

How do you clean your harps?
~ Right after playing I try to clear moisture patting my harmonica softly against my palm, then when I have time between gigs, I wipe my harmonica first with a dump cloth and then with a dry cloth.

What is the question interviewers never seem to ask you and...you wish they would? (Please provide your answer as well.)
~ I would like to tell you which is the question that I will never be too tired to answer: - What do the blues mean to you?- Some years ago I saw these words written on the wall of an old record store in Mississippi: "If you don't like the blues you have a hole in your soul". And it's true. To me blues is a miracle. The miracle of the blues is that it's so full of power and wisdom that it touches every heart throughout the world. It doesn't matter where you were born, what language you speak, or what color your skin is. Blues and spiritual, and music in general, are amazing gifts - many from wonderful unknown singers - to heal people's souls. This music calls out for peace and justice. Every time... Everywhere...

Are you still nervous before going on stage and if so, do you use any "rituals" to calm you nerves?
~ To be nervous it's not only normal but also an important sort of gift. The day I stop to have goose bumps before going on stage I'll probably have to stop to play. The truth is that you never really learn how to deal with it. It's part of the game and gives you the adrenaline you need. It's scary and beautiful. I would say that I'm a stage fright addicted.

What was the most memorable day in your musical career?
~ I had several memorable days my career. I should say Blues Music Awards, Carnegie Hall... Well, it's hard to say. Also to have the privilege to share the stage with and to record with The Blind Boys of Alabama, Charlie Musselwhite, Guy Davis, Marcia Ball, Ronnie Earl, Kim Wilson, John Hammond, Sonny Landreth, Garth Hudson of THE BAND and Bob Dylan, Eric Bibb, Ruthie Foster, Mike Zito, Bob Margolin, Flaco Jiménez, Steve Cropper, Otis Taylor, Richard Thompson and many others. Those were memorable days too. But one of my most memorable moments in music happened during one of my tours in the juke joints of Mississippi. A thing that I'll never forget for the rest of my life - more than anything else. One afternoon I was playing in a place in Greenville, Mississippi. It was an open space and there were people of every age. From children to old men and women. All blacks but my wife Angelina, my guitar player, and me. I was a little bit scared, but everything was fine. After the first set a very old black woman came to me, close to the stage. She softly and gently grabbed and squeezed my arm, whispering to me, "Hey man you touched my heart". It was one of the most beautiful experiences in my whole life. That woman probably didn't know that I was from another country, because probably she never went out not only from the US or Mississippi, but neither from her little town; a woman who probably had listened only to blues music for all her life. Well, that woman made me cry. I was shocked and speechless. During the ride back to the motel I realized how big that experience was to me and I started to cry again. If there were a "University of Blues Music", that old sweet woman that afternoon gave me a DEGREE - or better. She will never know, but that day she gave me "the right to play the blues". 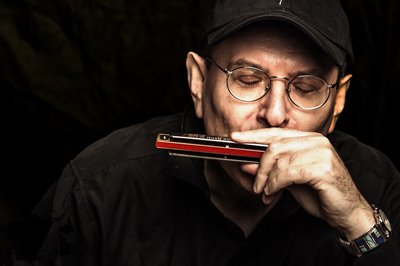 For more info about Fabrizio Poggi you can go to:

Answers given on May 26, 2016
Photo credits: Aigars Lapsa & Mario Rota