How did you discover the bluesharp ?
~ In the great sixties, listening to the British legends (Korner, Cyril Davies, Mayall, Long John Baldry...) going back to the roots of the black BLUES, and doing the same thing many other young musicians did! I think ,since the beginning of my personal journey on the roads of the blues, that the harmonica is the "INSTRUMENT PRINCE OF THE BLUES"!!

If everything would be possible (waking the dead included), which bluesharp player would you invite for a jam session?
~ With no doubts the immortal Sonny Boy Williamson II

What is your favorite bluesharp brand / type and tell us why?
~ Obviously the HOHNER, I play the Special 20, after using for a long times the MARINE BAND and the BLUES HARP, but I prefer the plastic body over wood, cause it is more resistant and doesn't make problems to my lips

What are the most important tips you can give to someone who wants to learn to play the bluesharp?
~ Listening good music, the historical blues masters, the great blues sessions... play with your heart before tecnique, and believe in the BLUES, always and everywhere!

Tongue blocking or lip pursing, what do you prefer and tell us why.
~ I'm a self-taught musician, and so I'm not able to tell something about it...

How do you clean your harps?
~ Externally with a clean cotton drenched with denatured alcohol, and with a tooth pick I remove the small residues of dry saliva in the holes, paying attention to not push inside in the direction of the reeds...

Describe the ultimate recording studio (not the technique but the facilities)
~ I recorded a live album in the 2011... I don't like the studio very much, I prefer the contact with the people and I try everytime in our concerts to create a real good feeling with the audience of the blues!

Are you still nervous before going on stage and if so, do you use any "rituals" to calm you nerves?
~ No, I'm a very calm 67 years old harp player! I blew and jumped on the stage as I was young(!) but sometimes I get excited as the first years... In the last october with the Treves Blues Band I was the opening act in the italian Tour of Deep Purple and in the future at Rome I'll play before Springsteen and I' m sure since now that I'll go crazy!!!!

What was the most memorable day in your musical career?
~ When I played on stage with the GENIUS OF BALTIMORE Frank Zappa, on stage of Memphis Blues Festival and when I recorded a Live album with the great Mike Bloomfield, an incredible musician and friend! 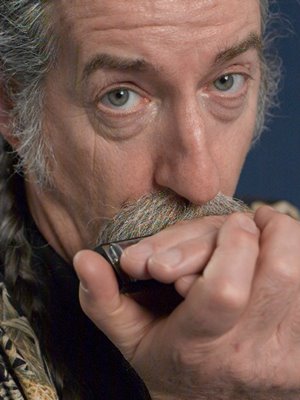 For more info about Fabio Treves you can go to: