How did you discover the bluesharp ?
~ In high school I played guitar and - mostly - bass guitar. But at the age of 18 I went into military service and I couldn't continue playing, because it was impossible to travel around with a bass and an amp. So I started playing the Blues harp because it was small - I could put it in my pocket and play everywhere. Plus, I was really getting into Chicago Blues music, and the harp is a really central Blues instrument. There was a Canadian Blues artist named Ted Cooper living in my town, who played guitar and harp on a rack. I'd go watch him as often as I could, and after a while he started asking me to sit in with him. He became my mentor and teacher. I spent 4 years in the Ted Cooper band and it was a real musical education.

If everything would be possible (waking the dead included) , which bluesharp player would you invite for a jam session?
~ That's a hard question. I have had the opportunity to jam with some of my favorites (Billy Branch, Paul deLay, Jason Ricci) - but I'd love to sit down with some of the original Blues Greats - probably Big Walter Horton and Junior Wells more than anyone. Of those still alive - James Cotton.

What is your favorite bluesharp brand / type and tell us why?
~ I am an endorser of Seydel harmonicas - I think they are really well made, airtight and durable. The top of the line is the 1847, but really all of their harps are good. I like the Session Steel as well

What are the most important tips you can give to someone who wants to learn to play the bluesharp?
~ Treat it as seriously as any other instrument, don't just be satisfied with blowing and drawing.Some people think a harp is a toy, not as serious as a guitar or piano, but if you play it seriously, it's as meaningful as any instrument.So learn it and practice it. Learn to make ACCURATE bends, not just "wah-wah" sounds....concentrate on getting a big tone....and listen to as many Muddy Waters albums as you can. All the Blues you'll ever need to learn is in there....

Whisky wine beer or ...?
~ Personally, I am a whiskey and beer kind of guy. I like the "Irish combo" of Jameson's chased by a draught Guinness - a meal in a glass :)

How do you clean your harps?
~ Most important is to keep them clean. I keep them in my case, I tap out the excess saliva as I play - and I always brush my teeth before a gig. Nothing more frustrating that a reed going dead on you because you blew food crumbs into it....and I wipe them off with the lint cloth if they get dirty

What is the question interviewers never seem to ask you and...you wish they would? (Please provide your answer as well.)
~ Well, THAT is one I've never been asked :)
But, seriously....
Q: What is the strangest harmonica session you ever played?
A: I was once asked by a very popular TV show to participate in a gag where a dog plays the harmonica. They filled an old harp with some meat, hoping the dog would try to lick it, and I would "lip sync" some harmonica riffs (playing behind the scenery, so it looks like the dog is playing). The dog was not very co-operative and only touched the harp for a second with his tongue. I spent a few hours in the studio, got a nice TV session paycheck, and played only one short note - "lip-syncing " for a dog!

Describe the ultimate recording studio (not the technique but the facilities)
~ I had the great fortune to record an album ("something good" by CG & The Hammer) at the legendary "Sun " studio in Memphis - a small room with vintage equipment and technicians who know Blues and Rock'n'roll so well that you don't have to explain anything to them - and right near downtown Memphis TN. - I'd say that was the best!

Are you still nervous before going on stage and if so, do you use any "rituals" to calm you nerves.
~ I love going onstage - I feel more comfortable playing to a crowd than anywhere else. So I am almost never nervous about playing, I'm actually quite happy when the waiting is over and it's time to start playing The only time I get nervous is if there are other good harp players in the house. When I had to play with Jason Ricci listening - THAT made me nervous! (The Irish combo would have helped then....)

What was the most memorable day in your musical career and tell us why.
~ Getting to meet and play with my musical role models is always a special event for me. When I got to spend a week hanging out and jamming with Billy Branch and later with Paul deLay - both when I was a fairly new player - were terrific learning experiences for me.
This year I visited Chicago and played at a tribute to Little Walter that Billy Branch was hosting - I got to play and sing with some of the top Blues musicians in Chicago, and that was really memorable. But maybe the best moment was when my band The Blues Rebels opened for Johnny Winter, just before he passed away. Johnny is a legend and I grew up listening to his albums and the albums he did with Muddy Waters. While we were doing the sound-check we played "Little by little" by my idol Junior Wells, and when we finished Johnny (who was almost completely blind) asked who that was singing and playing - I went over to talk to him and he said that it sounded great and reminded him of Junior Wells. Coming from a guy who had played with Big Walter and James Cotton (among others) - that was the best compliment I ever got! 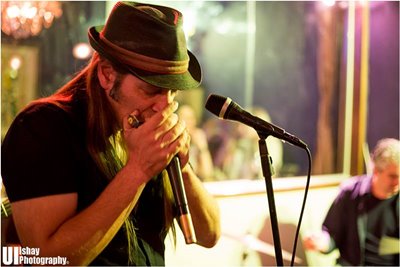 For more info about Dov Hammer you can go to: