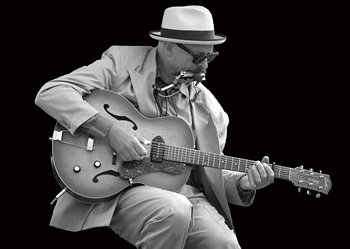 How did you discover the bluesharp ?
~ When I was about 14 in 1971 I listened to "underground radio shows" in San Francisco on KMPX and KSAN. One day I heard Paul Butterfield playing his "New Walking Blues". The sound of amplified harp knocked me out!!

If everything would be possible (waking the dead included), which bluesharp player would you invite for a jam session?
~ I usually like to be the only harp player when I play but would welcome Big or Little Walter, either or both Sonny Boys or Cotton.

What is your favorite blues harp brand / type and tell us why?
~ I endorse Seydel harmonicas. The stainless steel reeds last about 3 times as long as brass reeds. I play a "session steel" because I mostly play harp in a rack while playing guitar. This harp has a plastic comb with no edge so doesn't irritate my face. It's similar to a Hohner Special 20. I like to replace the stock covers with Seydel 1847 polished stainless covers. These allow a more open sound and the rack grips the harp better than the stock covers.

What are the most important tips you can give to someone who wants to learn to play the bluesharp?
~ Listen to the tastefulness of the blues masters and try to emulate that sound. The best tone is created with less notes. Use the 6 draw sparingly and almost exclusively over the V chord. Study Leonardo before trying to be Picasso.

Tongue blocking or lip pursing, what do you prefer and tell us why.
~ I play tongue blocking exclusively except for the doodleoodleoodle lick that can only be achieved by pursing. I started out with pursing and had a pretty cool tone but switched when I was about 20 because Rick Estrin told me to. I like the tone and percussive effects only achievable with Tongue blocking.

Give us the 3 most important albums every (beginning) blues harp player must buy.
~ Jimmy Reed greatest hits. Jimmy plays in a rack while playing guitar so is less complex than little walter or sonny boy. This makes his tasty sound more accessible to the newer player.
Harmonica Blues of the 20's and 30's on yazoo. This has some very difficult playing on it but is just plain cool.
"Harmonica Blues" by Dave Earl. If you buy this I'll email you a list of songs and explain the key harp used. I play 1st 2nd and 3rd positions. Mostly diatonic and some Chromatic. One song is 2nd position chromatic which is pretty rare.

How do you clean your harps?
~ The main maintenance I do is if a reed gets too stuck to free with hard blowing I'll open the harp up and slide a business card between the reed and plate to free it. I'll re-gap a new harp if the reed is unresponsive. I stopped filing reeds to tune them years ago when a filed reed detached and I almost inhaled it.

Describe the ultimate recording studio (not the technique but the facilities)
~ Having made most of my living for 25 years as a recording engineer that's a very deep question with a long complex answer. Budget is always a huge factor.The short answer is try to find a situation where the recording process does not hinder the soul of the music. I don't recommend being the musician and recording engineer/producer at the same time. I do it but most people don't have the years behind the big board that I do.

Are you still nervous before going on stage and if so, do you use any "rituals" to calm you nerves?
~ I'm not nervous on most of the gigs I do. Sometimes on a big gig I get a bit nervous but follow the advice Rick Estrin passed on to be at the Marin County Blues Festival (produced by Mark Naftalin) years ago. He said a bigger guy than him (at the time) told him "just be nervous" and it'll go away. The idea is that "trying not to be nervous" usually makes it worse. When I play hand-held harp I can channel nervous energy into the harp. This doesnt work with guitar playing though because you have to relax your hands and mind.

What was the most memorable day in your musical career?
~ 2 gigs stand out. Slide guitar player Ron Hacker and I played the San Francisco Blues Festival in 1989. I thought that since we were an acoustic duo that day the 10,000 people crowd would consider us intermission. When we went on stage the crowd was noisy and unfocused. As soon as we started playing everybody was transfixed on our sound. It felt badass. Later that year we traveled to Europe with Ron's 4 piece band. The 1st show we did was the Handsame Blues Festival in Belgium which had a crowd of about 4,000 people. We played balls to the wall and got over pretty good.

For more info about Dave Earl you can go to: