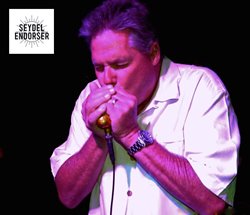 How did you discover the bluesharp ?
~ I was given my first harmonica by my parents, so I was playing, fooling around on the harp as a young child. As I grew older and the blues explosion of the '60's hit the US, I got exposed to the harmonica blues players from Chicago. Then Rod Piazza gave me my first Little Walter album, and that opened my ears to something completely new, and a whole different approach to playing the harp.

If everything would be possible (waking the dead included), which bluesharp player would you invite for a jam session?
~ Of course I'd like to sit and listen to the great Little Walter, but I'd also invite Big Walter, Sonny Boy Williamson and George Smith.

What is your favorite blues harp brand / type and tell us why?
~ I am an endorser for Seydel Harmonicas, Germany, and I play the Classic 1847.

What are the most important tips you can give to someone who wants to learn to play the bluesharp?
~ Listen to the greats, both from the past and the great players that are out there now. All the old recordings are readily available and easy to track down. Take the songs you like and learn them note for note. Then practice, practice, practice. Eventually, you might develop your own style.

Tongue blocking or lip pursing, what do you prefer and tell us why.
~ I don't prefer either, but I do both depending on the situation and what the song calls for, and the effect I want to achieve.

Give us the 3 most important albums every (beginning) blues harp player must buy.
~ My first and most influential albums were: The Best of Little Walter, Hoodoo Man Blues by Junior Wells, and then any of the early Muddy Waters albums with Little Walter blowin' harp.

How do you clean your harps?
~ I'm not a fanatic...I tap them out after I get done playing and wipe them down with a soft cloth.

Describe the ultimate recording studio (not the technique but the facilities)
~ I prefer a recording situation in which the band is playing live, and together in one room, maybe separated by gobos. I like to be able to communicate with the band members and play off of what they are playing in the moment.

Are you still nervous before going on stage and if so, do you use any "rituals" to calm you nerves?
~ I wouldn't say that I get nervous before going on stage, but I do get excited when the band starts to play, no matter what the venue, whether it's on the big stage in front of a large crowd, or in little joint with a small audience. Every situation presents a unique set of challenges and approaches to playing to the crowd. The key is learning how to work the crowd and getting them in your corner. I guess that's called experience.

What was the most memorable day in your musical career?
~ I've had many experiences along the musical trail, but I suppose that having the opportunity to play alongside such as great artists as Percy Mayfield, Pee Wee Crayton, Big Joe Turner, Smokey Wilson, and opening shows for BB King, John Lee Hooker, Buddy Guy and being able to hang with all the other great blues musicians that I've been able to meet, really stands out. But really when I think about it, the most memorable day I've had in my musical career would have to have been the gig that I just had yesterday! For more info about Chris Fast you can go to: