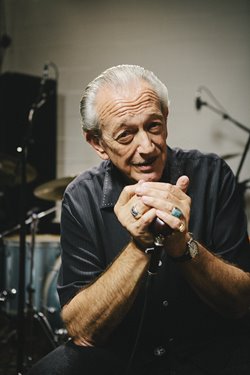 How did you discover the bluesharp ?
~ I don't remember discovering it. Seems like it was always there part of the soundtrack of growing up in Memphis. I don't remember the first time I heard blues. I think it was always there along with hillbilly and rockabilly and gospel. I heard guys playing on the street for tips growing up in Memphis. Those guys fascinated me and when I was a kid I would follow them around listening. When I got older I got to know some of those guys and would hang out with them and we'd have jam sessions.

If everything would be possible (waking the dead included) , which bluesharp player would you invite for a jam session?
~ Bullet Williams and both Walters and both Sonny boys and Papa Lightfoot and Palmer McAbee.

What is your favorite bluesharp brand / type and tell us why?
~ I only play Seydel. I really think there is no better blues harp. Right out of the box. I'd say they're generally about as good as any custom harp. I prefer "the 1847" model with wood comb and stainless steel reeds. They stay in tune longer than all the other brands. They're the oldest company going. Older than Hohner. Back in the 50s I liked Hohner, but the Hohner today doesn't seem to be the same and they don't last. The Seydel folks really put all their heart in making a really great harp. I love them!!!

What are the most important tips you can give to someone who wants to learn to play the bluesharp?
~ The first thing I say is always follow your heart. Listen to the tones and go for the tone that's from your heart. Be spontaneous. It's okay to listen to records and memorize in order to learn, but always strive to play your own blues.

Whisky wine beer or ...?
~ That can work too, but I overdid it at one point. ha ha ha. Now I haven't had a drink in nearly 30 years. I like to think it served it's purpose and I've moved on as far as drinking goes.

How do you clean your harps?
~ I keep them in one of those haliburton zero aluminum attache cases. They're supposed to be dirt proof and that helps. Sometimes I open up a harp and scrape along the sides of the reeds and take a razor blade and scrape the reed plate going under the reed.

What is the question interviewers never seem to ask you and...you wish they would? (Please provide your answer as well.)
~ Good greif! I think I've been asked every question there is at one time or another. About the only thing that comes to mind is that most people seem to ask questions about influences and technique and often don't seem so interested in the music. I hear people play and play and play and use all this technique and play really fast with lots and lots of notes and when I hear that I think, "well, that's really nice..., but where's the music? How come there's all techinque and no heart...no feeling?" My opinion is that technique shouldn't be all there is to it, but should serve to support the music...Not just use music as a vehicle to show everybody how much technique you have. That can be interesting for about 5 minutes and then I'd rather hear something that moves me.

Describe the ultimate recording studio (not the technique but the facilities)
~ I don't know a whole lot about gear. I do know that using tape gets a better sound, but it's just about impossilbe these days to find a studio that uses tape. Other than that I just like a studio that's comfortable with a knowledgeable engineer. It helps a whole lot if the engineer understands and feels the music. I've been in studios where the engineer was maybe a classical fan or was only into rock or something and as much as they knew about the technology of recording being clueless about the feel of the music prevented them for recording it sympathetically.

Are you still nervous before going on stage and if so, do you use any "rituals" to calm you nerves.
~ Instead of calling it being nervous I think of it as being concerned. Being concerned is okay. It means you care and won't to do your best and hope the folks that came will enjoy what I do and when they leave they know they got what they came for. I used to drink when I thought I was nervous, but when I realized I was just concerned that really took the stress out of it.

What was the most memorable day in your musical career and tell us why.
~ Too many to go into. I could write a whole book about memorable musical moments. But off the top of my head one that comes to mind is when I was living in Chicago. I'd been hanging out in blues clubs all over ths south and west sides and all the musicians thought of me as this crazy white kid that was a blues fan. I'd request tunes, but I never ever asked to sit in or even told anybody that I played. I was happy enough to be hanging out with my heroes and socializing. Having come from Memphis I already knew how to drink liqour like the men in these clubs. The blues clubs was strictly adults and I was still a teenager, but being big for my age I passed for 21 and got in all the clubs. Anyhow, I'd gotten to know this waitress really well and I'd played for her in her apartment and didn't think anything of it, but one night I heard her tell muddy, "you oughta hear Charlie play harmonica!" That changed everything. Muddy insisted I sit in and from then on as long as I knew muddy if I came to a club he was playing he always called me up to sit in. This was good because a lot of musicians heard me sitting in with Muddy and started offering me gigs around Chicago. So, that night when I first sat in with Muddy changed my life and I owe it to that waitress, Mary, because I don't think I ever would've asserted myself in that way. That was the beginning of my career in music. For more info about Charlie Musselwhite you can go to: