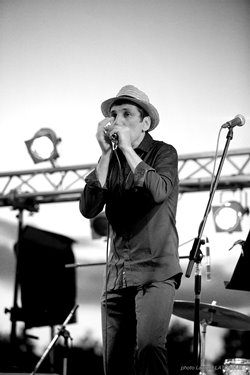 How did you discover the bluesharp ?
~ I discovered the harp listening Neil Young's album named "Harvest", when I was 16 years old. But, my old grand-father played harmonica. He played Italian traditional songs, and I remember listening to him when I was a little boy (at the age of five). Certainly this old and profound remaining mixed with Neil Young's sound gave me the passion for the magical harmonica's sound.

If everything would be possible (waking the dead included) , which bluesharp player would you invite for a jam session?
~ If just one, Sonny Terry ! But...

What is your favorite bluesharp brand / type and tell us why?
~ Without any hesitation: Hohner Marine Band
A mixture of "bitting" and of sweetness, it is just what is needed to express the blues. We can spit his guts, bleed his lungs, exhale all his sufferings and his pains, he cashes everything, he understands everything, and transforms it into melodious, generous, soothing notes and quacks. I have test other models, other marks, it is always with this harmonica that I felt the best vibrations, those who looked after my soul and calmed my agonies.

What are the most important tips you can give to someone who wants to learn to play the bluesharp?
~ Listen and reproduce at best.
Don't learn scales, play melodies.
Sing or whistle what you want to play on the harmonica.
Interest you in first forms of the blues, not only in the current blues, we find creative geniuses in all times.

Tongue blocking or lip pursing, what do you prefer and tell us why.
~ We must know how to use both to play in an interesting way.

How do you clean your harps?
~ As I can when it is necessary. I remove all the grime which can hamper, a blow of wet or alcoholic rag if need.

What is the question interviewers never seem to ask you and...you wish they would? (Please provide your answer as well.)
~ The interviewers always ask how for this or how for that (how did you discover the harmonica for example) but don't ever ask why? The question for which I wait is: why do you play the blues? Because there are lots of good reasons today to play the blues, the slavery did not disappear, it is simply and hypocritically transformed. The question of the sense was expurgated by the debate on the arts, and that bothers me. Entertainment and distraction are ok, but we can entertain and distract the audience with things that also make sense.

Describe the ultimate recording studio (not the technique but the facilities)
~ With friends to play the music which will also be recorded by friends, in a studious and professional atmosphere, but also warm and friendly.

Are you still nervous before going on stage and if so, do you use any "rituals" to calm you nerves?
~ It depends of the situation. When I have to play, my nervousness is often spread (displayed) several hours in advance (sometimes several days), because I am already passionately mentally concerned, concentrated, monopolized. A way of managing well this nervousness and of feeling reassured, is to have prepared well its affair, to know well its songs, to have made with them a story to tell. Sometimes, I make softenings and stretchings, even of the mouth and the facies and exercises of breath. I can turn to a local alcohol, but especially, I say good evening to the public before beginning to play, that eliminates a part of the stress, and throughout the concert, I speak and tell anecdotes on my songs, to establish and preserve a friendly and warm sincere contact with the public.

What was the most memorable day in your musical career?
~ It was when we opened for BB King to the arenas of Cordoba in 2006, with Keith B Brown. I accompanied on tour international an authentic bluesman from Mississippi, and we made the opening for BB King in an extraordinary place. We shook hands with him at the foot of the scene, we shook hands with him when he came down from it. Because it was symbolic for me to play with a true blues musician from Mississippi, cradle of the blues, and besides opening for the most illustrious and charismatic of them. I could also tell when I played Sonny Terry for Toots Thielemans, to Harmoliège festival. Or when a few years earlier, the same Toots Thielemans handed me the price Hohner in homage to Sonny Terry to the "Festival International de Musiques Vivantes".
I remember having also accompanied the illustrious pianist of Chicago Johny Big Moose Walker. It was in a small club in Quebec and that remains a wonderful memory.
And recently, in a french song festival, a woman from Mississippi told me "I wasn't in Mississippi since a long time, but listening to your music and closing my eyes, I could imagine that I was in my country", at this time, she added, smiling with the finger above: "And you sang it (the blues) in french, that's marvelous !" I was proud and happy because I think and I tell always and everywhere in France, that we can write songs and sing the blues in our maternal language and what she told me proves well that it works. I feel closer to my heroes bluesmen of the Mississippi by singing my songs of blues in French, rather than by continuing to imitate them in a sterile way. That's what she confirmed to me this day and I smiled by thinking of all these directors of blues festival in France who don't want to schedule me because I sing the blues in my maternal language. For more info about Cadijo you can go to:

Answers given on April 5, 2016
Photos by Laurent Latxague