How did you discover the bluesharp ?
~ When I was 16 years old, a friend gave me a Hohner Marine Band Diatonic Harmonica. He said why don't you take this and learn how to play it. I took it home and started to learn songs from records I had with Harmonica on them. A few years later I was working with bands playing clubs and making a living at it.

If everything would be possible (waking the dead included) , which bluesharp player would you invite for a jam session?
~ I would invite Norton Buffalo, Charlie McCoy, and Mark Ford.

What is your favorite bluesharp brand / type and tell us why?
~ My favorite Diatonic Harmonica is a Hohner Golden Melody. It has a very airtight comb and reed plates. It has more screws holding the reed plates to the comb than other models. Since the comb is plastic it doesn't expand and contract with moisture like an unsealed wood comb does. The reeds are set to equal temperament tuning which makes it better to play more melodic lines and even chromatic lines. Each reed takes the same amount of air-pressure to hit the notes. It's very airtight and easy to play. You don't have to play it hard to get the notes to work, like some other brands and models.

Whisky wine beer or ...?
~ I guess I prefer beer. Guinness Draft or Beck's Dark. I don't drink anything that leaves a residue on the Harmonica like Wine, Whisky or Beer before I play.

How do you clean your harps?
~ I take them apart and soak them in hot water to remove any residue stuck in the reeds, the reed plates or anything built up in the comb.

What is the question interviewers never seem to ask you and...you wish they would? (Please provide your answer as well.)
~ Question) What makes the playing Harmonica different from other musical instruments?
Answer) The Harmonica is the only instrument that you play blind. You don't have the benefit of being able see if you're playing in the right position or if you are going to hit the right notes by looking at them. There is no hand-to-eye coordination to help you. You have to learn by practicing and playing until it becomes an instinct that you know where you are on the instrument all of the time.

Describe the ultimate recording studio (not the technique but the facilities)
~ l like the old fashioned analog 2,5 inch reel to reel tape 16 or 24 track recording studios with the old 1970's mics like AKG microphones for the instruments and other expensive high quality studio mics for vocals.

Are you still nervous before going on stage and if so, do you use any "rituals" to calm you nerves.
~ No, I'm not nervous before I play. But I do like to be mentally prepared before I go up to play. I don't like to be rushed to play. Creating a sense of panic before the show doesn't help people play well.

What was the most memorable day in your musical career and tell us why.
~ In 1976 I got to play for 40,000 people at a stadium in Los Angeles behind the singer Tanya Tucker, and later Charlie McCoy with the band I played in. 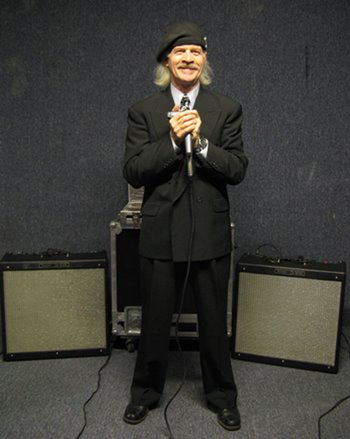 For more info about Brian Brazil you can go to: