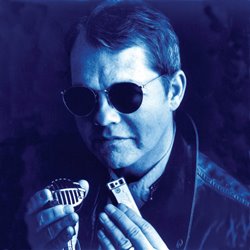 How did you discover the bluesharp ?
~ In the late 60's - I went to see the Muddy Waters Band in London - the harmonica player was Paul Oscher - I was impressed that he had the smallest instrument - but he made the biggest sound ! I decided right then that I wanted to be a blues harmonica player.

If everything would be possible (waking the dead included) , which bluesharp player would you invite for a jam session?
~ Little Walter is the king of amplified harp - so I should invite him - but he would blow me away - and also most other harp players would also invite him - so I would invite Hamie Nixon - one of my favorite country blues players whose work with Sleepy John Estes I have always loved.

What is your favorite bluesharp brand / type and tell us why?
~ I have a sponsorship deal with Hohner Harmonicas - and my preferred choice is Hohner Special 20's. The reason for this is that they have plastic combs - Marine Bands sometimes cut my lips - and my wife doesn't like me to have scabby lips !!

What are the most important tips you can give to someone who wants to learn to play the bluesharp?
~ Tip - in hot countries - don't leave your harps exposed after sound-check - I did this in Australia - and a strange insect crawled into my harp and lodged in my throat during the opening number - and I had to vomit from the side of the stage - not cool !

How do you clean your harps?
~ I don't clean my harps !! That way nobody wants to borrow one.

What is the question interviewers never seem to ask you and...you wish they would? (Please provide your answer as well.)
~ Q - Who is your favorite Jazz guitarist ? A - Kenny Burrell.

Describe the ultimate recording studio (not the technique but the facilities)
~ Favorite recording studio - Steve Vai's studio in the Hollywood Hills - I recorded The Yardbirds 'Birdland' album there in 2002 ( released in 2003 ) on Steve's Favored Nations label - with Jeff Beck / 'Slash' / Steve Lukather / Brian May / Joe Satriani / Skunk Baxter etc - I spent 4 weeks hanging round in Hollywood - but my parts only took 2 hours !

Are you still nervous before going on stage and if so, do you use any "rituals" to calm you nerves.
~ A couple of rum & coke's usually does the trick.

What was the most memorable day in your musical career and tell us why.
~ Hard to pin it down to just one - playing with Eric Clapton at Sheffield Arena - playing with 'Slash' in Texas - Playing with Steve Vai at Hollywood House of Blues - supporting 'Sting' at Sporting Lisbon Stadium with Nine Below Zero - but I will pick recording a track for the Yardbirds album with Jeff Beck at his home studio in Sussex - after which he cooked us all dinner. For more info about Alan Glen you can go to: